Battle of Crete and Greece Commemorative Council formed in Victoria

The council already has a series of plans for the 75th anniversary of the Battle of Crete.

The council has the support of a cross-section of the Greek Australian Communities, the Greek authorities in Australia, veterans’ associations, prominent politicians, researchers and authors and veterans’ descendants.

Some of the events planned include a photographic exhibition, a schools’ competition, lectures and seminars on the Greek involvement in World War II, the Greek campaign and the Battle of Crete, parades, olive tree plantations, plaque and memorial unveilings, commemorative services, wreath-laying ceremonies and book launches.

The Battle of Crete and Greece Commemorative Council welcomes the community’s involvement in the commemorations of the 75th anniversary of the Battle of Crete and beyond, and would like to hear from any interested parties, especially veterans’ descendants, youth organisations and readers in history with a special interest in military history, Cretan Greek history and WWII history. 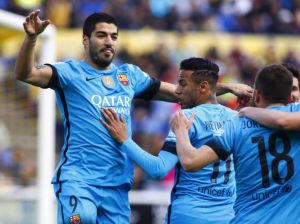 Lionel Messi, Luis Suarez and Neymar have scored a combined 91 goals this season for FC Barcelona and they will be favorites heading into the clash against Arsenal.

FC Barcelona, who have not tasted defeat in 32 matches, will be aiming to extend their dominance in their Champions League clash against Arsenal.

It started in 2006 when Barcelona came from behind against 10 men to score two late goals and win 2-1 in the final in Paris. Arsenal hasn’t reached the title match since.

There’s rarely a dull moment when these two entertaining and attack-minded teams meet, with those five matchups averaging almost four goals a game. And this year could be no different considering the scintillating way Barca is playing.

Lionel Messi, Luis Suarez and Neymar have scored a combined 91 goals this season, helping the Catalan team establish a club-record 32 matches without a loss heading to London.

No team has successfully defended the Champions League trophy but Barca is in prime shape to do so, even though coach Luis Enrique knows the potential of Arsenal heading into the first leg at Emirates Stadium on Tuesday.

“We are talking about a game that lasts 180 minutes,” Enrique said. “It will be complicated, because it’s a rival that can cause us problems.”

Arsenal has exited at the last-16 stage for the past five years and has never won the tournament.

Here’s a look at the other three matches this week:

There will be some familiar faces for Juventus and Bayern Munich when two giants of European football meet on Tuesday.

Juventus striker Mario Mandzukic scored 39 goals in 74 appearances for Bayern from 2012-2014, winning two Bundesliga titles and scoring in the Champions League final win against Borussia Dortmund in 2013. He resumed training Saturday following a month out injured.

It will be a return to Turin for Arturo Vidal and Kingsley Coman, who joined Bayern from Juventus last summer.

Bayern has won the team’s last three meetings but is without defenders Holger Badstuber, Jerome Boateng and Javi Martinez.

PSV, the 1988 European champion, is in the Champions League knockout stage for the first time since 2007 and faces 2014 runner-up Atletico Madrid. PSV tops the Dutch league, while Atletico is second in La Liga.

PSV is doing everything it can to ensure veteran midfielder Andres Guardado is fit for Wednesday’s clash with Atletico Madrid. The Mexico star, one of PSV’s best players this season, has been sidelined since late January with a hamstring injury.

“I’m assuming he will be playing,” said coach Phillip Cocu, who is without suspended captain Luuk de Jong.

Fernando Torres has broken out of another long scoring slump— this one lasted four months— with goals in Atletico Madrid’s back-to-back wins in the Spanish league.

This is Man City’s third appearance in the knockout stage, and easily its best chance of reaching the quarterfinals. In the last two years, City has faced Barcelona and was convincingly beaten both times.

City manager Manuel Pellegrini is frustrated by having to face Chelsea in the FA Cup three days before playing Kiev in Ukraine, and rested key players to focus on the Champions League. In a congested fixture schedule, City may have one eye on a League Cup final against Liverpool at Wembley Stadium on Sunday.

Dynamo’s appearance at this stage marks the first time the Ukrainian club has made it past the group stage for 16 years. Creative spark Andriy Yarmolenko is still recovering fitness after two months out with the leg injury he suffered against Maccabi Tel Aviv in the last match of the group stage.

Sanctions forcing the game to be played behind closed doors were lifted, following an appeal by Dynamo. 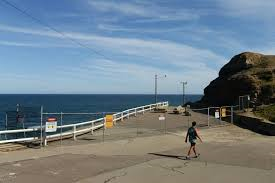 THE Bogey Hole is without a confirmed re-opening date, while the NSW Department of Primary Industries waits for the results of a geotechnical engineering report it said would be delivered “soon”.

A department spokesperson said DPI Lands commissioned the report following Newcastle City Council’s concerns about the stability of the terrain above the convict-built swimming pool.

“The results of this report are expected soon and the department will advise the community shortly thereafter on any work required to make the Bogey Hole safe,” the spokesperson said. “Members of the public should respect the exclusion in place and stay away. Attempts to enter the site are highly irresponsible and a potential danger to the public.”
DPI Lands closed access to the landmark in December. 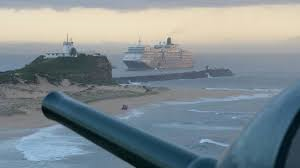 “SURE is majestic,” a cyclist at Queens Wharf said of the berthed Queen Elizabeth on Monday, in a line seldom overused in Newcastle.

The youngest of Cunard’s signature liners sailed into the harbour at 7am, a 91,000-tonne conversation starter measured in football fields and Titanics.
Onlookers drove, walked and rode to Nobbys to clap and cheer and fill their camera phones with the ship’s 16 gleaming decks and the sweep of its bow.
At Queens Wharf at 10am, Newcastle lord mayor Nuatali Nelmes presented the company with the keys to the city. 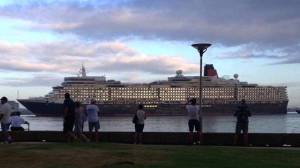 “It’s my great pleasure now to bestow the keys to the city on the Queen Elizabeth,” Cr Nelmes said.

According to tradition, the keys entitle the ship to “parade” through the city at will. A troupe of bellboys in Cunard red livery marched through an Air Force guard of honour. Onlookers clapped.

The Queen Elizabeth’s visit comprised one day of 120 on its world tour, and passengers had paid up to $33,800 for the privilege.
Onboard, the ship’s main lobby is a three-level cathedral of marble and wood, discreetly adorned in the block-letter Cunard font.

Corridors painted with the ports of the world lead to glass shopfronts of duty free Dior, Absolut and Tag Heuer. 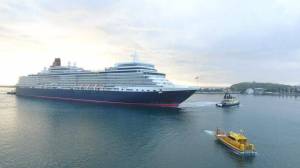 A cruise ticket buys nightly entry to the 820-seat theatre, where private boxes come with champagne and fondue strawberries.

A crew of more than 50 nationalities caters to passengers’ every need – from the croquet deck to the library to the royal spa – with unerring Cunard presentation and manners.

Those to have dined in the Britannia restaurant include the actor Sir Ben Kingsley, journalist and presenter David Frost – who died onboard of a heart attack in 2013 – and Her Majesty herself.

World War II veterans Frank Hall, 93, and Kevin Murphy, 95, were special guests at a ceremony on the ship’s aft deck on Monday to honour Williamtown’s 450 Squadron.

The two men, both based in Victoria, sailed from Sydney Harbour aboard the original Queen Elizabeth in February 1941 to join the war.

“It was unreal,” Mr Hall said.

“You didn’t know where you were going or when you would come back.”

Mr Murphy remembered finding his room on the luxury liner refitted with bunk beds, and how the men fought boxing bouts to keep themselves entertained.

The squadron landed in Egypt, and served throughout the Mediterranean. 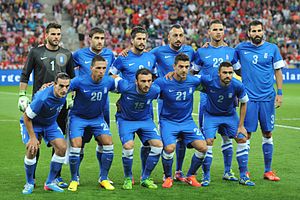 Etithad Stadium is back in line to host the Socceroos and Greece in June.
Melbourne was set to be frozen out of the two-game series against the 2004 European champion after negotiations between the Victorian Government and Football Federation Australia stalled.
But talks have resumed in recent weeks and have advanced to a point where, while not over the line, there is a confidence the second game of the series will be played at Docklands on June 7.
It is a game that would be almost certain to sell out given Melbourne’s huge Greek population and helps to establish a blockbuster couple of winter weeks for the Socceroos.
A grudge match against England is slated for Newcastle or Sunderland on May 27, before Ange Postecoglou’s men return to Australia to face Greece in Sydney on June 4 ahead of the Melbourne game.
It all serves as vital preparation for the start of the final round of World Cup qualifiers, which begin in September.
Talks broke down with the FFA after the Victorian government’s reluctance to commit too much funding to an event they did not have exclusivity for.
Other political considerations were that Sydney would get game one of the series, while the fact Melbourne has the third largest Greek population in the world also means the incoming tourism value of the game would not be high for the local economy.
It means FFA will likely not secure the financial windfall it may have initially hoped for, but to have the game in Melbourne is a far greater look for the sport than if it were to be played in Newcastle, as was potentially to be the case if the Etihad Stadium option fell through.
Greece has not qualified for Euro 2016 in France, but is still expected to bring a near full-strength squad Down Under.
More than 95,000 fans packed the MCG for the last clash between the two nations in 2006, a farewell game for the Socceroos before the World Cup in Germany.
source:billsportsreport.blogspot.com.au