Shark ‘jumped on surfers’ board’ at Bondi Beach 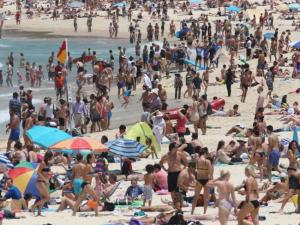 A SURFER at Bondi Beach has reported a six-foot shark hitching a ride on his board this morning.

Local man Dean Norbun said the shark jumped on his board before swimming off under another surfer.

He had paddling at the south end of the Sydney beach, about 40 metres from popular Icebergs club and pool.

Speaking on 2GB radio, Norburn was unfazed by the brush with danger, saying it was just a reminder there are sharks in the water.

“You just gotta get out there and have a go,” he said.

Bondi Rescue Lifeguards shared the story on Facebook, saying the water had been cleared following the incident.

“Lifeguards spoke to both men and cleared the water afterwards,” the post read.

“Will be a very memorable and (sic) surf for both guys.”

The incident comes during the busiest time of year for Australia’s most famous beach.

A combination of building surf conditions and summer holidays is drawing crowds to the Sydney beach, which is expected to be one of the city’s most popular Christmas Day destinations.

At least 14 shark attacks have been recorded in NSW this year.

The high number of attacks and sighting have forced the state government to look at new measures, with Premier Mike Baird travelling to the state’s north coast this week to announce the first eco-barrier to be installed at Ballina after Christmas.

The eco-barrier nets are an improvement on traditional shark nets used in Australia because they stretch from seabed to surface and shoreline to shoreline.

They are made of thick, rigid nylon that does not trap marine wildlife, as the older nets tend to do.

The new nets are part of the NSW government’s $16 million shark strategy to protect swimmers and surfers from shark attacks. Other measures in the strategy include drum lines, shark tagging and listening devices, to keep beachgoers abreast of where sharks are via updates on Twitter.