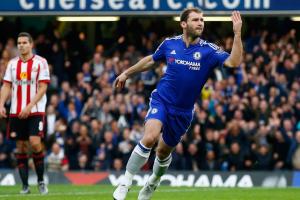 Branislav Ivanovic says Chelsea must put the thought of salvaging their campaign in the Champions League to the back of their minds.

With the Blues 11 points off fourth place, winning the European Cup is now their best hope of qualifying for the competition again next season

The Blues face Paris St Germain, who knocked them out in the last 16 last season, at the same stage this term.

Chelsea play the first leg in February but the defender says they must concentrate on improving their position in the Premier League where they are 15th.

He said: “It’s weird to play the same team again, this is the third year in a row, but we will have plenty of time to think about the Paris game later.

“It was very difficult and emotional for us when we went out to them last season so we will have special motivation this time around.

“The Champions League has been completely different from the Premier League this season. We did well and we finished first in the group.

“That didn’t give us any benefit for the draw this time as we will play a difficult game against PSG, but we are not scared to play any team in the world with the quality we have.

“But until the first leg in February, we have to be focused on the Premier League and make sure we change our situation in that competition before the Champions.
League starts again.”

Do you want to hide popular articles just this time or forever?

Police called to Bluewater as shoppers queue for THREE HOURS to leave
Star Wars: The Force Awakens cast will all return for eighth film
Cheese triggers the same part of the brain as hard drugs
YouTube star’s shock as Uber driver ‘watches videos at the wheel’
Woman ‘knocks man unconscious with single punch after sexual assault’

•Arsenal Announce Themselves as Title Favourites with Win over Manchester City