The stats that put Leicester City alongside the likes of Barcelona, Bayern Munich and Real Madrid 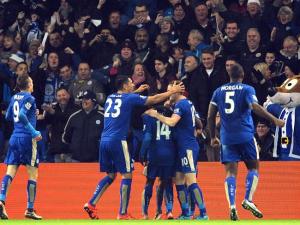 Leicester City’s dramatic rise to the top of the Premier League has taken the football world by storm.

And while queries have been levelled at the Foxes over whether they can maintain what is an incredible title charge, the stats suggest Claudio Ranieri’s thrilling outfit are here to stay.

A 2-1 victory over reigning champions Chelsea confirmed Leicester’s status as ‘the real deal’ this season, while the club’s form over the last eight months puts them well and truly among Europe’s elite.

In total, Leicester have won 17 of its last 25 league matches. Only Barcelona, Bayern Munich and Real Madrid have won more in that time across Europe’s big four leagues.

Now all Leicester needs to do is maintain their run.

Had the season started back in April, the club’s record of 57 points from 25 matches would have been enough to put them on pace with the Premier League’s best over the last five years.

Of the last five domestic champions in England, only Manchester United’s 2012-13 team and Chelsea’s 2014-15 team had accrued more than 57 points after 25 games.

Furthermore, the average points total for English champions over the last decade is 2.3 per game. Over the last 25 matches, Leicester have gone at 2.28.

There’s no doubting Leicester are in illustrious company, but the comparisons with Europe’s best don’t end there.

The free-scoring Foxes are fourth in the big four leagues for goals this season, behind only Borussia Dortmund, Bayern Munich and Barcelona.

Such has been the shock of Leicester rocketing to the top of the Premier League table nearing Christmas; it has become easy to forget just how dire the situation was a few months ago.

On 1 April 2015, the Foxes were dead last on the Premier League table with just eight matches remaining in the season. They were a game behind 19th-placed Burnley and four points from safety.

But so began a miraculous escape from danger. The club would win four straight games to exit the relegation zone and seven of their last nine matches in total.

Leicester ultimately finished 14th on the table, six points ahead of the relegated Hull City.

Then came another setback. Nigel Pearson was sacked as manager following a swift falling out with the club’s board and the local media, replaced by 64-year-old Claudio Ranieri.

While the criticism was that Ranieri was ‘past his best’ and ‘too old’ to succeed at the King Power Stadium, his results this season suggest he is anything but.

Challenges do remain. Leicester have just secured four points from clashes against Manchester United and Chelsea, but have Everton, Liverpool, Manchester City and Tottenham to play in the next three weeks.

However, if they can continue to string points together and produce another few months like the ones that have preceded it, anything is possible.