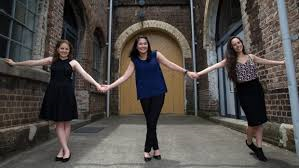 Grace Parker was sick of her family car breaking down – so she took matters into her own hands and enrolled in automotive studies as part of her HSC.

Self-confessed city girl Mala Rigby’s love of animals drew her to agriculture and Claudia Nielsen, a rising hockey star who hopes for a career in science, was attracted to the practical side of primary industries.

The trio helped girls increase their reign over boys in this year’s HSC results, with females blitzing subjects traditionally dominated by males as well as making a clean sweep of the history and English courses.

At the prestigious First in Course ceremony on Tuesday, 82 girls, including Grace, Mala and Claudia, and 34 boys were recognised for topping the state in at least one of their subjects.

See your ad here
“Yet again, the girls have well and truly outperformed the boys, it is about a 70/30 split in terms of girls who have topped courses as opposed to boys,” said NSW Education Minister Adrian Piccoli.

“Girls have done very well in languages, as they have done over the past years, and we have girls topping what would be historically, but fortunately no longer, male-dominated courses including subjects like agriculture.”

The president of the NSW Board of Studies, Tom Alegounarias, said boys were still strong performers in maths and science.

“I can say that broadly in STEM males still dominate, but the gap is closing and the margin is one now that you cannot say there is a subject that is inherently better suited to females or males,” Mr Alegounarias said

The top students recognised on Tuesday will be joined by about 70,000 students who will receive their HSC results online or via SMS from 6am on Wednesday. The Australian Tertiary Admission Rank (ATAR) is released on Thursday at 9am.

Mala, 18, from Pymble Ladies’ College, fell in love with agriculture after spending some time working on her north shore school’s small farming plot.

“As a Sydney girl, studying agriculture really made me see the skill involved and showed me just how important agriculture is,” Mala said.

A talented hockey player, Claudia, 18, hopes to spend next year at the Australian Institute of Sport before studying science at the University of Western Australia the following year.

Grace, who already has an offer to study international studies at Wollongong University, said she would love to continue her passion for repairing cars.

“I’d love to be a mechanic, I see so many females get ripped off by mechanics because the men think they don’t know what they are talking about,” Grace, 18, from Dubbo, said. “If females knew what mechanics were up to, it would be a whole different game.

“It’s not about a woman’s revolution, it’s about giving women the same opportunities.”