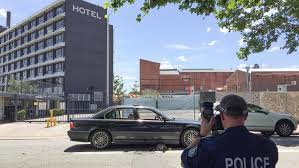 A MAN has been taken to hospital with stab wounds to his arm and hand after being attacked in Newcastle West.

The 33-year-old was sitting in traffic in Steel Street, with the driver’s window down, when a man ran towards him from the footpath and started stabbing him, police said.

The driver used his arms to protect his body, which bore the brunt of the attack.

A woman, who was on her bike behind the car, confronted the attacker while other witnesses watched in horror.

The attacker then turned his attention to the woman. He pointed the knife at her and threatened her.

Unfazed by his behaviour, she persisted to try to make him stop, and within moments he fled on foot.

The attacker was last seen turning left onto King Street.

The 33-year-old, who is a green P-Plater, was driving a dark coloured BMW sedan when he was attacked about 12.45pm.

See your ad here
He suffered multiple wounds to his forearm and hand and has been taken by ambulance to John Hunter Hospital for treatment.

Police have shut Steel Street between Hunter Street and King Street as they cordon off the crime scene.