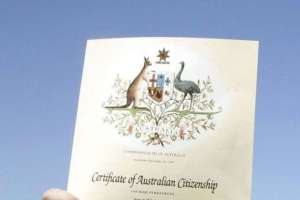 Backed by the Coalition and the Opposition, the law is believed to be challenged in High Court, as its critics insist on its unconstitutionality.

One of the most controversial bills introduced by the government became a federal law on Thursday, as it passed both houses of parliament, backed by the opposition. The ‘Allegiance to Australia’ bill, as it was named by the Abbott government, amends the Australian Citizenship Act 2007 to provide explicit powers for the cessation of Australian citizenship in specified circumstances where a dual citizen engages in terrorism-related conduct.

Under the amendments, Australian citizenship could be stripped from a dual national convicted of a terrorism offence in Australia, who could also be sentenced to a minimum of six years’ imprisonment. But it would also apply to dual citizens overseas who engage in terrorist conduct or fight with an enemy army. The laws are intended to prevent Australians with dual citizenship who go abroad to join, support or train with extremist groups like Islamic State from returning to the country. About 100 Australians are believed to be fighting alongside extremists in Iraq and Syria at the moment, according to Australian intelligence agencies.

The new laws can be applied to Australians overseas who help raise money or recruit and train new members for extremist groups, as well as those who engage in violence directly. The Department of Immigration and Border Protection would decide whose citizenship to revoke, based on advice from intelligence agencies. It is already preventing people from flying out of Australia if the government suspects they are on their way to join extremists in Iraq or Syria, Minister Peter Dutton told parliament, stating that 199 people had already been stopped since July.

After a period of intense debate, the bills became law on Thursday with a final reading in the Senate, with the support of the ALP, among criticism from the Green Party and concerns expressed by a string of crossbench senators. Independent Senator Nick Xenophon addressed the parliament and said taking away the Australian citizenship from the terror suspects with dual citizenship will be like poking them to plan and plot against the nation.

“Do we just give up, revoke their citizenship and then let them free range with their sick, twisted minds to do damage to Australians and to other innocents abroad?” he asked. “Isn’t it better to be involved in counter-terrorism actions, international investigations, arrests, convictions and imprisonment?”

Apart from advocating the government to focus on counter-terrorism, Senator Xenophon pointed out that the changes were inconsistent with an earlier national security bill, which aimed to prevent Australians travelling overseas as foreign fighters.

“The government said we shouldn’t let people go overseas to fight, to be involved in terrorist attacks and we should keep them here, but this bill is saying if you’re overseas, we don’t want you back in the country,” he said.

“There seems to be an unusual dichotomy there, an uneasy dichotomy between the two.”