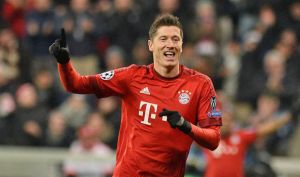 Ronaldo, 30, is wanted by Manchester United and Paris Saint-Germain, while the MLS want to sign him to one of their franchises.

The Portugal international is thought to be eyeing a move away from the Bernabeu – possibly in January – after a fall-out with manager Rafael Benitez.

And Spanish newspaper AS claim Real have already drawn up their list of replacements should Ronaldo quit the club.

Bayern Munich’s Lewandowski, 27, is top of that list and Real are prepared to make him their highest-paid player to prise him away from Germany.

The Poland international boasts 26 goals from 26 appearances for club and country this season – attracting the eye of Real’s president Florentino Perez.

His agent, Cezary Kucharski, was spotted during Madrid’s 4-1 home win over Getafe at the weekend.

It is claimed United themselves are willing to offer Ronaldo £250,000 a week to bring their former player back to Old Trafford.

That figure would dwarf all but Wayne Rooney’s £300,000 weekly wage in the Premier League – yet is nothing to what Ronaldo could earn at PSG.

The French champions are reportedly willing to pay their top target £26m a season after tax, which is roughly double what he currently earns in Spain.

As for Real, they are also considering their options should they lose the services of Karim Benzema, who is currently involved in a court case over a blackmail scandal.