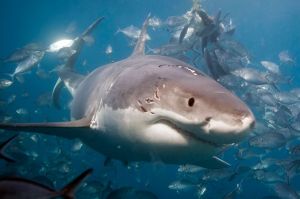 This battle-weary great white shark was dubbed “Scarface” after these dramatic pictures were taken off Australia.

Two great whites clashed with each other to try and get the most food.

The younger shark had been attempting to “jump the queue” and feed on fish when a five metre female charged in at the same time.

The older shark snatched the juvenile in her jaws – but instead of taking a chunk out of him, she simply spat him out before continuing her meal.

The underwater shots were captured by photographer Jason Whittle off the Neptune Islands.

He said: “It was definitely a warning not to jump the line and respect the elder, queen of the territory.

Terrifying clash: The older shark catches the juvenile in her jaws 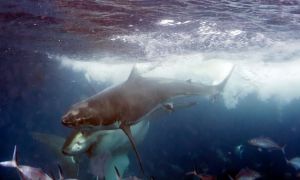 Beaten: The younger shark moves away from the confrontation

“With that much power she could have ended that smaller shark without any problems.

“But sharks don’t have hands to say ‘get out of the way’ so the next best thing is for them to open their jaws to show how big they are.”

Jason managed to capture the frames despite issues with his underwater camera housing and rough conditions inside the shark cage.

“It felt like I had waited three or four hours to get a shot,” he said, “but it was well worth the whole trip just for that one.”