Newcastle:Elton John kicks off Australia tour in the Hunter Valley 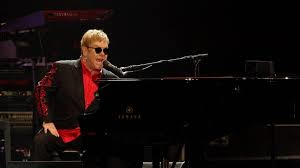 Billed as the All The Hits Tour, the 68-year-old delivered exactly that during the two-and-a-half hour set at Hope Estate which featured classic songs including Bennie and The Jets, I’m Still Standing, I Guess That’s Why They Call It The Blues and Candle In The Wind.

Backed by a five-piece band which included Nigel Olsson (drums) and Davey Johnstone (guitar), who have both played alongside John for much of his 47-year long career, the show also featured heavily on the British star’s 1973 album, Goodbye Yellow Brick Road.

“We just celebrated the 40th anniversary of Goodbye Yellow Brick Road a couple of years ago and that makes me feel extremely old,” John told the crowd.

Performing under a dazzling 12 metre wide chandelier prop, John chatted with his audience throughout the set, speaking about his love of Australia and reflecting on his career, including a tribute to long-time collaborator Bernie Taupin who wrote the lyrics for many of his biggest hits, including Your Song which delivered one of the set’s highlight moments.

The audience sang along with John to anthems Rocket Man, Tiny Dancer and Don’t Let The Sun Go Down On Me, the latter of which he dedicated to Newcastle country music star and personal friend of John’s, Catherine Britt.

The hits kept coming as the show came to a close as John encouraged the audience to get on its feet to dance along to Saturday Night’s Alright (For Fighting), The Bitch Is Back and Crocodile Rock, proving that even after nearly 50 years in the game, Sir Elton still knows how to rock.