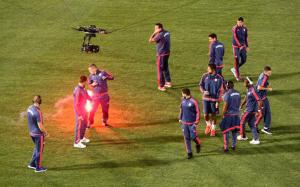 Panathinaikos was on Monday deducted three points by the Greek Super League for fan violence before the recent Athens derby with Olympiakos which had to be called off before kick-off.

Panathinaikos was also fined 190,000 euros and instructed to play four home matches behind closed doors, while the league handed Olympiakos a 3-0 victory for the disrupted match.

The deduction means that Panathinaikos, who has the right to appeal, now sits in fifth place with 19 points, 17 points behind league leaders Olympiakos.

Referee Andreas Pappas made the decision to call off the match on November 21 after taking into account the violence both inside and outside the Apostolos Nikolaidis Stadium.

Immediately after the decision was announced to the spectators, dozens of fans rushed onto the pitch and fought with riot police.

Police said 14 arrests were made and that three police officers were injured, one seriously.
Tear gas was used by police to bring order and the stadium suffered serious damage at the hands of the unruly crowd.

Two hours before the scheduled kick-off unruly Panathinaikos fans fought with police outside the stadium.

Fans threw rocks and other debris at police who in turn responded with tear gas to put a halt to the violence after 10 minutes.

Police also clashed briefly with fans inside the stadium near the players’ entrance tunnel.

The appearance of the visiting Olympiakos players on the pitch then prompted four flares to be thrown towards them by fans.

Olympiakos vice-president Savvas Theodoridis told the Greek TV network Nova, which was broadcasting the match live, that “the new law is clear, the match should not be played. We do not play in a jungle”.