The Easter Sunday match between Wellington Phoenix and Melbourne Victory might as well be a premiers plate battle.

They are the best in the League currently, and seeing as this will be the last time the two meet before the Premiers Plate gets decided, it’s probably the only chance we’ll see any of them drop points.

One point differentiates the two, and more is at stake for Melbourne Victory than the Phoenix.

“It took us an eternity to get settled,” he admits.

“We created a numerical advantage in the middle of the park almost every time we had the ball yet we weren’t composed enough to retain possession.”

Muscat admits that Victory have been winning without playing well, and knows that the team has to work on a multitude of problems to have a competitive advantage over Phoenix.

“To win consistently, you need to perform well,” he says.

“We can perform better than we did and we will do.”

Wellington paid the price for being without Nathan Burns last week, conceding 0-3 to Sydney FC all in the first half.

It was left with 10 men after the half time return which made it almost impossible to bounce back.

While being a goal machine for the Phoenix, Burns has also been integral in creating opportunities for Roy Krishna and Michael McGlinchey.

Burns will be on hand this week at least after returning from Socceroos duty and will be a vital player if the Phoenix expects to bounce back. 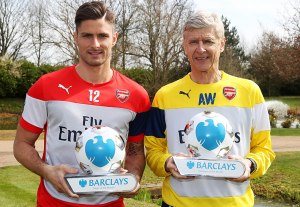 Arsene Wenger has urged his Arsenal side to maintain their good form when they face Liverpool on Saturday in the early kick-off.

Arsenal have won nine of the past 10 matches in the Barclays Premier League and the manager has not given up hope of an unlikely title win, with his side seven points behind Chelsea having played a match more.

“We have the aspiration to win the next game and that’s quite good enough,” he said. “After that, win the next one.

“Whatever is mathematically possible you have to try to achieve but that doesn’t depend only on us. What does only depend on us in the final run is our performances and our results, so let’s focus on that.

“After that if everything goes for us, you never know, but you can only master your own performances so let’s focus on that and be realistic and continue to earn the right to win the games. That’s what we want.

“You know after the international break it’s always important that you come back and straight away you are on it. I’m not too much in mathematics now. We do that after the game. What is important is just for us to win the game and produce the performance.”

Defeat by Manchester United last time out ended Liverpool’s unbeaten 2015 and was a blow to their hopes of a top-four finish and Brendan Rodgers knows his side can ill-afford to slip up again this weekend.

“Our possession wasn’t good enough in the last game,” the Liverpool manager said. “We were never in position to receive the ball and to press the ball. We need to be technically better.

“We will go there tactically very clear. We need to get something from the game.”

Rodgers is hopeful that Daniel Sturridge (hip) and Adam Lallana (groin) will face Arsenal after pulling out of the England squad, while Raheem Sterling missed England’s friendly draw against Italy on Tuesday with a toe problem, but is in contention. Martin Skrtel and Steven Gerrard will miss out through suspension.

Mikel Arteta, Mathieu Debuchy and Abou Diaby played in a friendly victory over Brentford this week and it remains to be seen if they play any part.

Match Facts
Matches between Arsenal and Liverpool have had more hat-tricks than any other fixture in Barclays Premier League history (five).
There have been eight 90th-minute goals and two scored in the 45th minute in the last 12 BPL meetings between Arsenal and Liverpool.
Liverpool have kept just one clean sheet in their last 18 league matches against Arsenal.
Only Manchester United (seven) have won away at Arsenal more often than Liverpool (six) in the BPL.

A US man missing at sea for more than two months was celebrating a miraculous rescue on Thursday after being picked up by a passing ship and flown to dry land, the US Coast Guard said.

Louis Jordan, 37, who was reported missing on January 29, told family members he had survived by catching fish with his hands and drinking rain water, according to the Coast Guard.

He was spotted drifting on his stricken sailboat approximately 322 kilometres off the coast of North Carolina by the German-registered Houston Express tanker and taken aboard.

A US Coast Guard helicopter then hoisted him to safety back to a hospital in Norfolk, Virginia, a statement said.

Frank Jordan, the sailor’s father, told CNN he did not know what had caused his son’s boat to break down.

US media reports said the boat had capsized and Louis Jordan was found sitting on the upturned hull when he was plucked to safety.

Frank Jordan said his son was in good spirits during a brief conversation with him following his rescue. He told CNN he had not given up hope Louis would be found alive despite his inexperience as a sailor.

“I knew he had a good seaworthy boat,” Frank Jordan said.

“I felt the boat was going to keep him alive, so I had all sorts of worries because he’s not an experienced sailor.”

Louis had left the relative safety of the marina where the boat was moored to “go out and catch some fish.”

How his son ended up so far off course was unknown, Jordan said.

“I called him at one point a few days after he left land … and he was a few miles offshore. As far as how he got off track, I don’t know,” he said.

He said his son’s “strong constitution” and religious belief had kept him alive.

“He told me on the phone that he was praying the whole time, so I believe that sustained him a great deal,” he said.

Gizelle Laurente was outraged when her son Jacob Priem turned away from a Qantas flight due to his autism. Picture: Aaron Burton Source: News Corp Australia

JACOB Priem had been looking forward to visiting his dad and baby brother for Easter since February – only to have his hopes dashed at the last minute.

The six-year-old was booked to fly from Darwin to Brisbane yesterday.

His mum Gizelle Laurente, couldn’t afford to fly with him to drop him off so he was booked through Qantas’s unaccompanied minor service.

As per normal procedure, the captain of the plane met with Ms Laurente at the boarding gate. Ms Laurente told him that although her son was autistic he had been given a higher than normal dose of medication that morning to ensure a smooth journey – as per his doctor’s advice.

Complete with a letter supporting Jake’s travel from his paediatrician Ms Laurente couldn’t see a reason why her son wouldn’t be able to fly.

“The pilot told me unless you buy a ticket and travel with your son he won’t be flying,” she said.

“I explained that I couldn’t afford a ticket and he said ‘well I’m sorry your son can’t board’.

“I was heartbroken for him, I just started crying.”

However, a spokesman for Qantas said the paperwork Ms Laurente presented at the time of boarding was normally presented when booking the tickets or a few days ahead of travel.

“The health and safety of our passengers is our foremost concern at all times,” the spokesperson said.

“In this case, the crew sought professional medical advice and took the decision not to allow travel until further information about the condition could be gathered.

“The crew had the passenger’s best interests in mind and there was absolutely no intention to cause distress or discriminate in any way.”

“My son was discriminated against because he has autism … it was degrading,” she said.

“We can light the Sydney Opera House blue to raise awareness for autism but my son can’t catch a plane on his own because he is different.”

“He is in a normal school, he is very high functioning,” she said.

“He was just sitting quietly at the airport waiting for his flight, he wasn’t causing any trouble, I just don’t ­understand.”

There was another unaccompanied minor, a seven-year-old girl, who was allowed to board the flight.

The Qantas spokesman said the airline was in touch with the family and hoped to be able to offer a re-booking.

The NT News understands Jacob was offered a flight to Brisbane today and will make it to Brisbane in time for Easter with his dad.