Michael Skibbe: Moving forward Down Under 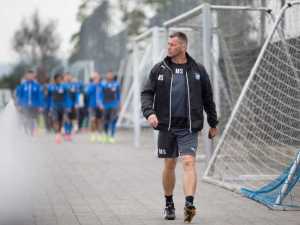 Without several of his star players, Michael Skibbe looks to learn more about the supporting cast at his disposal, during the Greek national team’s footballing trip to Australia

The jury is still very much out on Michael Skibbe, the current manager of the Greek national football team. With very little evidence to judge him on, press and fans alike remain undecided about the German coach, whose patchwork of a career hardly makes for exciting reading.

A relative unknown in Greece, especially when compared to previous coaches Otto Rehagel and Fernando Santos, Skibbe was a surprise choice to take on the role of national football manager, after the blink-and-you’ll-miss-them tenures of Premier League Renaissance man Claudio Ranieri and Uruguayan Sergio Markarian.

A man of few words so far, Skibbe seems to have at least understood that in its current transitional state, the national team needs a specific course of action, not a series of (more) words concerning past glories. Though he is yet to truly settle on a formation, his real and ultimately most vital challenge will be to win over a group of players who appear to be a talented but highly splintered group of individuals, especially after the disastrous qualifying run for this summer’s Euro 2016.

With the old guard of Karagounis, Katsouranis and co now firmly out of the picture, the national team has found it difficult to discover and build around a new core. Though arguably technically superior compared to their predecessors, the current crop of players seems to lack both the direction and the drive that was prevalent in previous teams.

The raw materials are surely there however: in Socratis Papastathopoulos and Kostas Manolas, who looks set to make the jump to the Premier League this summer, with both Chelsea and Manchester United vying for his signature, Greece has a fine central defensive pairing that combines experience, pace and positional nous. In the midfield engine room, Petros Mandalos of AEK Athens, and more so Kostas Fortounis of Olympiakos, are two excellent on-the-ball schemers, capable of grabbing games by the scruff of the neck and up front, Kostas Mitroglou continues to refine his striking game, with a league-winning season with Benfica highlighting just how far he’s come from his days as a talented but hilariously insubordinate hotshot at Olympiakos.

That being said, for their trip to Australia and their games in Sydney and Melbourne (on 4 and 7 June respectively), the Greek national team – and the aforementioned playing ‘core’ – will not be at full strength.

High-profile players feeling the strain of an intense footballing season like Manolas, Mitroglou and playmaker Kostas Fortounis will not be making the trip, although Socratis Papastathopoulos – who will surely have added defensive responsibilities at Dortmund next season, with Matts Hummels swapping his Borussia shirt with that of Bayern Munich – will be lining up in defence, after personally asking Skibbe to join the squad.
So, with some of Greece’s most important playing cards missing from Skibbe’s deck, what can we expect to see from the team, when it gets the ball rolling on Australian soil?

Well naturally, these matches will be a great chance for Skibbe to experiment with formations, but more importantly, have a closer look at some players that have had a stellar or breakout season this year, individuals that could very well get the chance to stand up and be counted in time for the start of Greece’s qualifying campaign for the 2018 World Cup, kicking off on 7 October.

One of the players that will surely be looking to impress in Australia will be Tasos Bakasetas, the shining light in a Panionios team that punched way above its weight throughout the entire season and is currently fighting for European qualification in the Superleague play-offs. A player who started his career as a winger at Asteras Tripolis, this season has seen him switch to the centre of the park, with Panionios coach Marinos Ouzounidis dragging him away from the byline and placing him ‘in the hole’, somewhere between a number 10 and a support striker, where Bakasetas can fully take advantage of his shooting and passing abilities, which were wasted during his days on the wing.

Directly in front of him, Skibbe could look to field Apostolos Vellios, a powerhouse of a striker, who after failing to settle at Everton, Blackpool and Lierse over a seven-year period, came back to the Greek Superleague with Iraklis at the start of the season and quickly caught the eye of heavyweights Panathinaikos, Olympiakos, PAOK and AEK Athens with his goalscoring and all-round forward play. Finding the net 13 times, Vellios offers the national team another attacking option in the Mitroglou mould, with the Iraklis marksman, however, providing even more of an aerial threat and muscular presence in the opposition box.

Rounding out an eye-catching trio is 24-year-old Nikos Karelis, the ex-Panathinaikos winger/striker who is now making a name for himself at Racing Genk, but is still looking to carry his impressive club form on the international stage. Possibly still waiting for an international coach to pair him with attacking partners that he could ‘click’ with, the all-action style of Karelis requires a stern managerial hand to stop it from being a pointless expression of wasted energy. Used wisely and with an attacking ‘pillar’ to spin and work around, Karelis could well provide the match-winning injection of attacking pace that is in short supply in this Greece team.

There is little doubt that the Greek national footballing side is a team very much in flux. As a group of athletes still trying to exit the long shadows of the Rehagel-Santos era, they have found confidence hard to come by and patience from the Greek public even more so. Whether Skibbe can find a new formula capable of providing Greece with its missing groove is still unknown, but if Greece can return from Australia having gained a few more players that the team can count on, then the German will surely look upon the trip as a success.

And that will certainly do for now. October, though worryingly closer than this team would like, can wait.