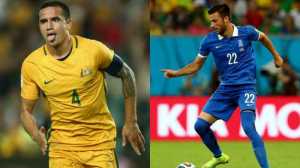 The two-match friendly series against Greece, beginning this Saturday in Sydney, gives Socceroos boss Ange Postecoglou a final chance to test his game plan against high-quality European opposition ahead of the last phase of World Cup qualifiers beginning in September. Together with last week’s friendly loss against England, it also gives him the chance to experiment with his system and give untried players the opportunity to play with the senior Socceroos.
In 29 games since his appointment in October 2013 on a five-year contract, Postecoglou has guided the Socceroos to a famous Asian Football Championship in 2015, and has navigated the squad into the final group stage of World Cup qualifiers.
Over that period of time he has capped more than 50 players and continues to blood new young players, consistent with his stated aims of developing the depth of his squad and improving the quality of his team’s performance so that they can take on and beat the best in the world.
Two of the recent new additions to the squad are forwards Apostolos Giannou and Chris Ikonomidis.
More than any player on the field, Giannou most typifies the divided allegiances many of the fans attending the two matches will feel. Greek Australian supporters would understand better than most the difficulty Giannou will have faced in choosing which country to play for.
Faced with a choice of playing for either Greece or Australia, Giannou ultimately committed with the Socceroos. It’s likely he’ll enter the matches against Greece with mixed emotions. Although his junior development took place in Melbourne, much of his senior career and experience has been in Greece, where his goalscoring form last season attracted the interest of overseas clubs and resulted in a move earlier this year to Chinese Super League club Guangzhou R&F. It also earned him a cap for the Greek national team in a friendly against Turkey last year, just before Postecoglou persuaded him to swap sides where he made his debut against Tajikistan in March this year.
While most fans will be urging him on, hoping he can take up the Tim Cahill baton, if he scores his first international goal for Australia against the country of his birth, any celebration by the player himself may be muted.
Ikonomidis, who is on Lazio’s books, is currently on loan to Serie B club Salernitana, where he recently scored his first goal. The 21-year-old winger recently reflected on how playing regular football in the strong Italian league has helped his development.
“The last six months (in Italy) have been crucial for my development. I’ve continually played 90 minutes on a regular basis in a quite difficult league. So it’s been fantastic for me, both character-wise and ability-wise, to put myself up against some great players in Europe. Getting my first goal a few weeks ago was also fantastic as well.”
“It would be fantastic for me to run out there if I’m given a chance against Greece, as that’s my grandparents’ heritage. It would be fantastic at home in front of friends and family. And they’re still a quality opposition so we’ll have our work cut out for us, but I think it will be a great experience altogether.”
Looking towards the Greece games after the England match, Postecoglou said: “Our performance against England was further proof that we are capable of matching it with the best teams in the world both individually and collectively and now we will push ahead and look forward to playing another high-level European team, this time in front of our own fans in Sydney and Melbourne.

“As a team we are looking to continually evolve and improve, but what is encouraging for me is that we are doing it by playing our brand of football, which is exciting for our fans to watch. Greece will be tough but we will play our game, take the match to them and hopefully give our fans a performance that gets them off their seats when we go forward. We did that in the first round of World Cup qualifiers around Australia and I’m sure a similar performance will see the Sydney fans create the tremendous atmosphere and occasion.”

Possible Line-Up for the Socceroos: 4-3-3 Formation

GK: Matt Ryan is Postecoglou’s first choice between the sticks, but also in the squad are Mark Birighitti and Adam Federici. Ryan’s lack of recent game time at club level at Valencia may sway Postecoglou on relying on him for the bulk of the keeping duties against Greece.
Defenders: The full back positions appear to be Postecoglou’s least settled positions, with a number of players having been tried.
RB: Josh Risdon and Ryan McGowan may get to share this position over the two legs with Victory’s Jason Geria in line for a debut as back up.
CB: In Matthew Spiranovic’s absence, Bailey Wright appears to get the nod to partner Trent Sainsbury in the centre of defence with Mark Milligan as back up if required.
LB: Liverpool full back Brad Smith has been Postecoglou’s left back of choice lately. Youngster Alex Gersbach may get some game time for his first cap.
Midfielders: DM: In a three-man midfield, skipper Mile Jedinak is first choice for the holding mid role. The skipper has earned a rest after a Cup final and the friendly against England, so Milligan and he may share the position over the two legs.
AM: Aaron Mooy and Tom Rogic are first choice here in the absence of Massimo Luongo.
Wingers: Postecoglou’s need for speed in the front third is well satisfied with the options available including Robbie Kruse, Matthew Leckie and Chris Ikonomidis.
Strikers: Cahill is still first in line, but there’s plenty of back up in Giannou, Nathan Burns and Jamie McLaren.