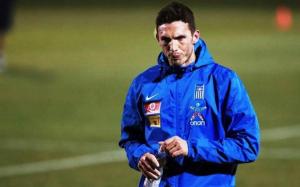 China-based Giannou, who was born in Greece but grew up in Australia, played for the former European champions in November but was allowed to switch to the Socceroos because his appearance was in a friendly.

Giannou represented both Greece and Australia at youth level but he was persuaded to commit his future to the Asian title-holders by a visit from Greek-born Socceroos coach Ange Postecoglou.

“When Ange came to Greece to talk to me about playing for Australia he didn’t want to force me to do anything.

“I have a few friends in the Greek national team that’s for sure. It will be fun.”

Giannou made his Australia debut in March but his lone appearance for Greece, a 0-0 draw with Turkey, was shrouded in controversy.

The Greek FA was later fined and forfeited the match 3-0 for not submitting the required paperwork for Giannou, who made his Australia debut in the 7-0 win over Tajikistan in March.

“I really like him as a player. He’s strong, he’s tall, he’s fast. I believe he was one of the best strikers in the Greek league and [now] for China,” Samaris said on Friday.

Giannou’s emergence comes at a time when Australia are searching for a successor for their record goal-scorer Tim Cahill, who is in the twilight of his career at 36.

Postecoglou has forwards Cahill, Nathan Burns, Matthew Leckie and Giannou available after they missed the 2-1 loss to England in Sunderland last month.

Greece, who failed to qualify for Euro 2016, have no injury concerns but coach Michael Skibbe left Benfica striker Kostas Mitroglou out of his squad.

The two sides will also meet in Melbourne on Tuesday. 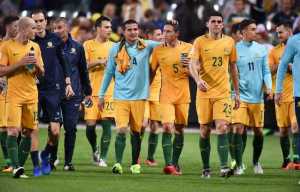 Socceroos coach Ange Postecoglou says the time has come for Australian venues to provide “world-class” pitches for the national team, claiming the prospect of patchy fields in Sydney and Melbourne for their upcoming matches against Greece is unacceptable.

Postecoglou admitted he was fearing the state of the ANZ Stadium surface in the lead-up to Saturday’s first international after the venue played host to a typically bruising State of Origin encounter on Wednesday.

In particular, the national coach was taken by the care afforded the pitch in Sunderland, where Australia was beaten  2-1 by England last Friday night.

Postecoglou even suggested that the nation’s politicians should promise that the Socceroos won’t be subjected to substandard conditions in Australia.

You play in a place like England and I understand [football] is their sport, but they take pride in what they present. We played on the pitch in Sunderland and the groundsman, who’s probably been there 100 years, took great pride in presenting a top-class pitch. I want us to feel the same,” he said. “I don’t want to serve up something that ‘looks’ green and looks OK and can be disrupted by a rugby league or a union or an AFL game.

“It’s nothing against those sports but they all have an oval ball that doesn’t have to roll on the [pitch]. It’s common sense. There’s an election promise I’d like to see – that a politician comes out and says we’ll provide a world-class venue for our national team.”

What Postecoglou seemed to find most disturbing was that Australian venue operators and other administrators still didn’t seem to think it was an issue.

“World football has progressed. The days of watching games on muddy pitches in the English Championship are long gone,” he said. “We’re probably one of the last bastions of that mentality, that you don’t need good grass. Football’s played on good pitches in the poorest of countries. Yes, there are areas here in Asia where we have issues but that’s often for economic reasons as much as anything else.

“In the football world a good pitch is standard. People come to a game wanting to watch quality football and that can’t happen when the working conditions are unacceptable.”

But one thing that slightly underwhelmed Postecoglou about the England match was the intensity on offer – feeling the home side sat back too much and that he would look to face opponents willing to play at a higher intensity in the future.

“Even in the England game, we didn’t get the pressure on our game that I thought we would. I kind of want that as it’s what we need to go to the next level,” he said. “The end game is to go to a World Cup and make an impact. Everything we do [in friendlies] is to ask whether it would stack up against the world’s best.”

With a crowd of just 45,000 tipped to come on Saturday – less than half of the 95,000 who witnessed Greece face Australia at the MCG a decade ago – Postecoglou said the nation seemed to be struggling with the idea of no longer being the underdog.

“Even when we were great with our golden generation, what we liked about it was that we were punching above our weight as a nation. We revelled in that,” he said. “We’re uncomfortable if all of a sudden I’m telling people we don’t want to be the underdog anymore, maybe that confuses people a little bit, but we’ve got to get to that point, to achieve great things beyond what we’ve already achieved.”

With South Korea getting beaten 6-1 by Spain this week and Japan no longer an invincible Asian force, Postecoglou wondered whether the region’s apparent stall had been caused by the need to constantly seek external validation.

“I think Asian football suffers from what we were talking about – a real struggle with self identity. When I see Japan and Korea, in particular, but some of the others as well, there’s no difference between their technical players and anywhere else in the world,” he said. “But they all employ foreign managers, they all think there are gaps in what they do, so you’re already admitting you’re not good enough. At some point someone from outside Europe and South America will win the World Cup and from then on it will be open slather because we won’t have to feel inferior.

“With professionalism now there isn’t a great deal of difference, whereas before it was ostensibly an amateur game around the world. We’re so obsessed with what we’re missing that we’ve covered over what we’ve got. I don’t think there’s a quality problem in Asia, just a self-belief issue.”

As such, Postecoglou says he has no choice but to think Australia will not only qualify for the next World Cup but perform admirably in Russia.

“It’s not about qualifying – I want us to do so in a certain manner. If the end goal is qualification, we did for the last World Cup and it cost the manager [Holger Osieck] his job. That can’t be the motivation – the motivation has to be to go to a World Cup and make an impact,” he said.

“It’s a tough group. We sat down a few months ago and mapped out the next 12 months, and we’ve got some really challenging trips. The boys fly back here to play Iraq and then go straight to the Middle East to play the UAE in very challenging conditions.

“Then there’s Saudi [Arabia] in October when the European and Asian boys will have to fly in and then return to Australia immediately to play again. So I’m under no illusions it will be tough. But I expect us to qualify and I expect us to do well.”