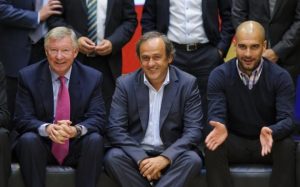 Sir Alex Ferguson has warned Pep Guardiola that he will not find it easy in England and to forget about trying to replicate the success he enjoyed at Barcelona in Manchester.

The former Manchester United manager believes Guardiola will be a success at rivals City but he is adamant the Catalan is about to walk into the toughest test of his managerial career when he leaves Bayern Munich.

He is also now on course for a third consecutive Bundesliga title with Bayern but Ferguson, who won 13 Premier League titles, reckons England will provide a level of domestic competition Guardiola has never encountered.

“Pep has got a fantastic work ethic about him,” Ferguson told Sky Sports News. “And he demands that from all his training sessions. So anyone who says they’re not going to work hard won’t last long I’m sure of that.

“He has got great coaching ability there’s no doubt about that. It’s interesting because it’ll be difficult to match what he did at Barcelona.

“Obviously Man City have had a real coup in getting him because he’s an outstanding coach, but Pep won’t find it easy. English football is not easy. Every foreign coach who has come to England will tell you that.

“Arsene Wenger, after a few months [of arriving], he was talking about that. Even Jose we he came, after his first season he realised what he achieved was hard work.

“So, he will be a success I don’t think he’ll ever replicate what he ever did at Barcelona but that was a high standard. They were the best.”