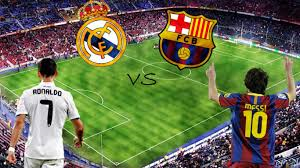 One of world football’s greatest rivalries resumes when Barcelona host Real Madrid this weekend and we look at the numbers behind the derby.

Barcelona entertain arch-rivals Real Madrid at Camp Nou in a Clasico that could well have major ramifications in the race for the Liga title.

Third-placed Madrid head to Catalunya knowing that defeat will see them slip 13 points adrift of defending champions Barca, a difference that should prove too difficult to close in the seven subsequent fixtures.

Here, courtesy of Opta, we take a look at the key statistics ahead of the resumption of one of football’s greatest rivalries:

0 – Barca have never won a league game against Real Madrid when top of the competition and holding an advantage of 10 points or more (D1 L2).

1 – Barca have lost just one of their last seven league games at home against Madrid, winning five. Their only defeat in that run was a 2-1 loss in April 2012.

3.22 – In 171 matches between the two sides, the average of goals scored per game is just higher than three, though the most common result is 2-1 to Real Madrid, which has occurred 18 times previously.

4 – The last four red cards in matches in all competitions between the two teams were all shown to Madrid players.

1 – The latest instalment will be the first meeting between Luis Enrique and Zinedine Zidane in their coaching careers. The latter will be making his Clasico bow in the dugout.

2 – Zidane scored three goals against Barca in all competitions during his time as a player with Madrid, two of those coming when lining up against Luis Enrique.

5 – Luis Enrique and Zidane met five times in all competitions during their playing careers, winning one game apiece).

14 – Lionel Messi has scored 14 goals in 19 La Liga matches against Real Madrid, twice as many as Cristiano Ronaldo – though the Portuguese has featured in six games fewer.

20 – Messi, Luis Suarez and Neymar have scored a cumulative 20 La Liga goals against Madrid, while Gareth Bale, Karim Benzema and Ronaldo have managed just 12 – Bale is yet to register against Barca in La Liga.

38 – Suarez has been involved in more goals (26 goals, 12 assists) than any other player in La Liga this season, Ronaldo is second with 28 strikes and nine assists.