Greek Australian sailor at sea in the Middle East

Kathy Kiryakos was the first member of her family to join the military.

Royal Australian Navy sailor Able Seaman Marine Logistics – Personnel Kathy Kiryakos, of HMAS Darwin, prepares for a patrol in the Middle East region from the base in Manama, Bahrain, during Operation Manitou.

Even though Mediterranean family values are extremely strong and transcend many generations, a Greek Australian sailor has discovered an even bigger, extended family aboard HMAS Darwin.

Able Seaman (AB) Marine Logistics – Personnel Kathy Kiryakos, from the Melbourne suburb of Oakleigh, is deployed aboard Darwin, which is conducting maritime security patrols in the Middle East region on Operation Manitou.

Operation Manitou is the Australian Defence Force’s contribution to international efforts to promote maritime security, stability and prosperity in the Middle East region.

Darwin’s primary goal is to contribute to the Combined Maritime Forces, which is a 31-nation partnership focused on defeating terrorism, preventing piracy, encouraging regional cooperation and promoting a safe maritime environment.

AB Kiryakos works in Darwin’s ship’s registry and is primarily responsible for personnel management and administration of the Ship’s Company.

“Every day is different aboard the warship,” she said.

“I’m also a member of the Ship’s Emergency Medical Team and assist the Flight Deck Team when called upon.

“We were constantly training and doing damage control exercises during the workups as we prepared for the mission.” 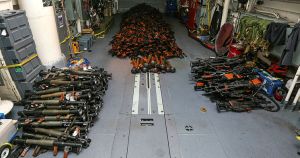 HMAS Darwin’s boarding team uncovered and seized a large weapons cache, following a boarding of a fishing vessel during their deployment to the Middle East region as part of Operation Manitou.

AB Kiryakos said she was the first member of her family to join the military.

“It was a spur of the moment decision to join the Navy in 2013; it really came down to an advertisement I saw in the newspaper,” she said.

“I completed a business traineeship when I finished school, so the Marine Logistics – Personnel trade suited me well.

“Enlisting was a shock to my system as I hadn’t done a lot of sport or fitness training before.

“Now I am fit, on my first sea posting, my first deployment and my first time overseas.

“It is all new and very exciting.”

AB Kiryakos is from a multicultural area with a large Greek community – she grew up speaking and writing Greek at home and during her schooling at Oakleigh Greek Orthodox College.

“I am the youngest child of a close-knit family, but I was the first to leave home,” she said. “Darwin’s crew is also close- knit as they are always encouraging and looking out for each other.

“It is the best part of the Navy and I have made many new friends. My family misses me, but they are very proud.”

The Charles de Gaulle Carrier Strike Group is deployed to the gulf to participate in operations against Islamic State militants in Iraq as part of US Naval Forces Central Command’s Task Force 50.

AB Kiryakos said it was an eye-opening experience to be a part of Operation Manitou aboard Darwin.

“I can see we will make a difference,” she said.

“We are putting all our training into practice and we will help to keep illicit drugs off our streets.”