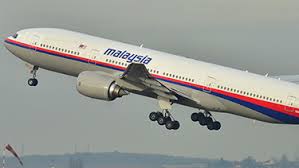 Two pieces of debris found in Mozambique are ‘almost certainly’ from missing flight MH370, the federal government has confirmed.

One of the pieces, stamped with ‘676EB’, was found in December but initially dismissed as rubbish and only reported to authorities earlier this month, prompted by media reports of the other piece, which has the words ‘NO STEP’ on it.

The pieces arrived in Canberra for testing four days ago and on Thursday, Transport Minister Darren Chester said investigators had concluded they were consistent with panels from a Malaysia Airlines Boeing 777 aircraft.

He said finding the objects on the east coast of Africa was consistent with modelling of debris drifting from the search area in the southern Indian Ocean.

Authorities remain certain they area searching in the right area for the plane which disappeared on March 8, 2014 with 239 people on board, including six Australians.

So far only a piece of wing, known as a flaperon, discovered in July on the island of Reunion, has been confirmed as being from the missing jetliner.

Australian Transport Safety Bureau commissioner Martin Dolan told AAP earlier this month pieces could take that long to make it across the sea because the rate of drift and, to some extent, the direction depended on how much of the object was sticking up above the waves.

An ATSB spokesman confirmed the governments of Malaysia, Australia and China remain of the view the search area will not be expanded beyond the current 120,000sq km zone in the absence of credible new information.

Just over 20 per cent or 25,000sq km of the underwater search area is yet to be combed, with completion estimated as mid-year.Mr Dolan also recently told AAP the area would not be re-scoured as he had confidence in the quality of the work, which was being done by the world’s best sonar experts.

Another object found on the shores of Reunion earlier this month by the same member of a beach clean-up crew who found the flaperon was last week deemed unlikely as being from MH370.

Mr Dolan also flagged on March 10 the possibility of debris being found in South Africa, 12 days before the Malaysian transport minister announced an object had been discovered near the town of Mossell Bay.

The minister said it could be from an inlet cowling of an aircraft engine.A spokeswoman for the Joint Agency Co-ordination Centre, which is organising the search off the West Australian coast, said the authenticity of photos in media about the South African find, showing an object with part of a Rolls Royce logo, could not be confirmed.