FYROM ‘dumping’ migrants back in Greece, sources on border say 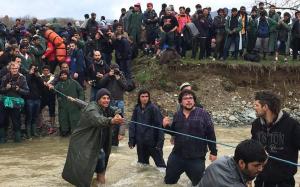 Police sources on Greece’s northern frontier with the Former Yugoslav Republic of Macedonia (FYROM) on Tuesday told Kathimerini that some 1,000 migrants and refugees who managed to breach the sealed border on Monday were being returned without formal consent from the Greek government.

Greece’s deputy defense minister said on Tuesday he could not confirm nor deny whether hundreds of migrants who left a Greek transit camp and crossed into FYROM on Monday had been returned back to Greece.

“What I know is that any procedure will take place via the usual diplomatic means,” Dimitris Vitsas told Greek TV when asked about a Reuters report citing police sources in FYROM saying 500 migrants were returned to Greece.

Police sources at the transit camp in Idomeni on Greece’s northern border said on Tuesday that FYROM authorities have been returning migrants back into Greece via unofficial routes.

“They take them by car through paths in forested areas where there is no fence and dump them back onto Greek territory,” a source who declined to be named told Kathimerini.

According to migration rules, FYROM has the right to return refugees and migrants crossing its borders illegally, but diplomatic sources stress that this needs to be done through official channels.