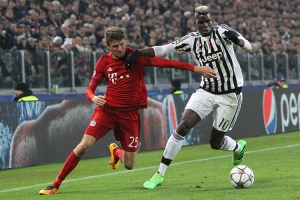 The last four Champions League quarterfinal spots are up for grabs this week with Barcelona and Manchester City both well-placed, while a European heavyweight will head for the exit after Bayern Munich play Juventus.

Five-time champion Bayern were looking certain to advance from the Round of 16 with a two-goal lead during the first leg in Turin, only for late goals from Paulo Dybala and Stefano Sturaro to earn Juventus a 2-2 draw and revive the Italian league leader’s hopes for Wednesday’s second leg in Munich.

Spanish league leader Barcelona hold a 2-0 lead over Arsenal, who need to get over the disappointment of Sunday’s FA Cup exit to Watford, the 2-1 defeat at home ending their bid to win the trophy for a third straight year.

Barcelona haven’t lost in a total of 37 games straight across all competitions, a Spanish record, and can count on home support on Wednesday.

Manchester City are in a similarly comfortable position ahead after beating Dynamo Kiev 3-1 away in their last-16 first leg, while Atletico Madrid and PSV Eindhoven are scoreless ahead of Tuesday’s other game.

Here are some things to know ahead of the last Round of 16 games:

Bayern hope to finish the job at home after conceding late goals to Juventus and allowing the two-time champion back in the tie.

Bayern have won their last three games at home against Italian sides, and has looked unstoppable this season in Munich, winning their three group games against Dinamo Zagreb, Arsenal and Olympiakos by an aggregate score of 14-1.

Pep Guardiola’s side warmed up for Juve’s visit with a 5-0 win over Werder Bremen on Saturday, when Arjen Robben had a rest and Mario Goetze made his comeback after five months out with a thigh injury.

Barcelona are bidding for their 10th straight win at home in the Champions League on Wednesday.

Even a draw at the Camp Nou, where they haven’t lost in more than a year, will be enough to keep the Catalan club on track to become the first side to defend the Champions League since the old European Cup was given a shake-up in 1992-93.

“It won’t be an easy game at all,” said Belgian defender Thomas Vermaelen, a former Arsenal player. “Although we have a small lead, you can never say that they are out. They have very quick players and that makes them dangerous. We’ll need to concentrate.”

Barcelona’s last home defeat was against Malaga in February 2015.

Manchester City are on the brink of qualifying for the Champions League quarterfinals for the first time, in a season when their domestic form is starting to go off the rails.

Nine points off the lead in the Premier League, it appears the rest of this season boils down to success in the Champions League.

City produced one of their best displays of the season to beat Dynamo 3-1 in the first leg, making the English team a heavy favorite to advance — especially since Dynamo has never won in England.

The last time Dynamo reached the quarterfinals was in 1999, when Sergei Rebrov — the team’s current coach — was leading its attack.

Atletico are bidding to reach the quarterfinals for the third straight season and are coming off a scoring streak of nine goals in their last three games. They have won four in a row in the Spanish league.

PSV captain Luuk de Jong returns from his one-match suspension and hopes to lead the team to its first victory in Spain in 13 games. Following the scoreless first leg in Eindhoven, however, a score draw also would be enough to send PSV through.

Recent history is against Phillip Cocu’s team. PSV failed to win any of their three away matches so far this Champions League campaign, losing at CSKA Moscow and Wolfsburg and securing a goalless draw at Manchester United.

Tuesday’s game comes days before what is likely to be the decisive match in the Dutch Eredivisie next weekend, between PSV and Ajax.

“We have shown in the past we can play well in big matches,” De Jong said. “We have to do it again in these two games.”