Barcelona vs. Arsenal to be the highest combined revenue game in UCL history 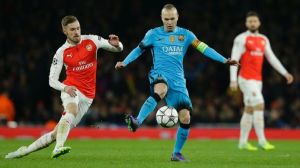 The Champions League clash between Barcelona and Arsenal features two clubs with combined revenues of almost one billion euros — the highest ever for a last-16 tie in the competition, according to new figures.

The European tie with the second highest joint revenue takes place in the Europa League, where Manchester United take on Liverpool in a meeting featuring teams with a combined revenue of €911.3 million (£704.2 million).