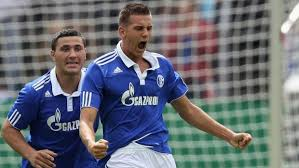 Sydney Olympic believe they have unearthed a gem after announcing the signing of former Schalke midfielder Rene Klingenburg as the wave of young foreign players to the state leagues shows no signs of slowing down.

The often forgotten fields of the National Premier League NSW are now blossoming into fertile grounds of talented visa-players who are prepared to gamble on breaking into the A-League via these semi-professional clubs.

Klingenburg, 22, follows the arrival of 13 players from Japan and South Korea who left the pathways of their more established football systems at home in pursuit of professional contracts this season.

After falling out with the Bundesliga giants’ youth ranks after clashes with staff and teammates, Klingenburg opted for a fresh start in Australia and joined Olympic for the remainder of the season where he hopes to impress professional clubs. A-League clubs were notified of his ability after just one training session with Olympic but overseas markets are also proving an incentive for the foreign players.

Olympic president Bill Papas believes it’s not just the lure of the A-League, but also the growth of the Asian market where clubs in South East Asia are becoming regular buyers of players in the state leagues.

“We are experiencing an influx of players from more established leagues to Australia who are eager to gain exposure and experience in a competition where they can also develop,” he said. “Being at the doorstep of one of the commercial markets being Asia, it’s obviously a huge incentive.”

It’s a significant gamble for foreign players considering so few graduated to the A-League from the state leagues, with Fabio Ferreira and Hiro Moriyasu the notable success stories. Tasuku Sekiya is one of the Japanese players lighting up the state leagues, emerging as one of the shining lights in an otherwise disappointing season for APIA Leichhardt. The fleet-footed forward was playing for lower league Japanese club Wesada United where he was noticed by former Australian-based player, Naoki Imaya, and offered the opportunity to further his development in Australia.

Sekiya has done his cause no harm this season but even if he fails to become a full-time professional in the A-League, he will go home with what he regards as two valuable assets: learning English and strengthening his weaknesses.

“I want to try to get into the A-League,” Sekiya said. “I want to play and I want to study English, I want both of these. [The NSW Premier League] is very physical, very strong. It’s different, Japan is very technical but Australia is physically very strong.”