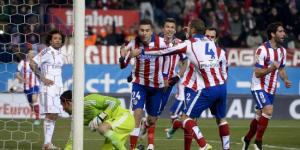 The match has been scheduled to take place in July, the same month Victory take on Italian Series A champions Juventus

Atlético de Madrid will be in Australia competing in the International Champions Cup Australia, presented by Audi against Tottenham Hotspur, and will play Victory as part of an extended pre-season tour Down Under.

Victory is scheduled to take on Italian Series A champions Juventus in the ICC tournament at the MCG on Saturday 23 July.

The announcement is a major win for football fans in regional Victoria, following the success of Victory’s Hyundai A-League home-and-away matches in Geelong in the last two seasons.

The club is also scheduled to play Newcastle Jets at Simonds Stadium in Round 8 of the 2016/17 campaign.

“We are proud to have the opportunity to test ourselves against some of the best club sides in the world,” said Victory CEO Ian Robson.

“We’re thrilled to play this game against Atlético de Madrid in Geelong, a region we’ve had a close association with, particularly over the last few seasons. The people of Geelong have been magnificent in their support of Victory, and we look forward to that continuing.
“We encourage all of our fans to support us in our matches against Juventus and Atlético de Madrid, in what is a rare opportunity to witness some of the world’s best players in Australia,” he added.

The tour match will be the second time Simonds Stadium has featured an international fixture after Victory hosted an AFC Champions League qualifying play-off against Thailand club Muangthong United in 2014.

“Atlético de Madrid is one of world football’s most powerful clubs. It was only weeks ago Atlético was battling out the UEFA Champions League final in Milan, and now Geelong beckons,” said the Hon John Eren MP, Minister for Tourism and Major Events; Sport and Veterans.

“These aren’t just great spectacles, they’re a big boost to the local economy and a rare chance to see the world’s very best in our own backyard.”

Atlético de Madrid, the 2013/14 La Liga champions, recently overcame the likes of Bayern Munich and Barcelona to reach the UEFA Champions League final for the second time in three years.

This followed an impressive La Liga campaign where the club finished third behind Barcelona in one of the strongest competitions in world football.