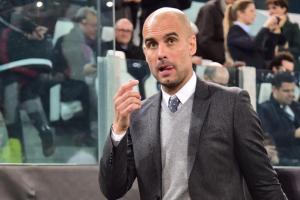 Pep Guardiola said he did not “give a f–k” about the fitness of his players but questioned the mental preparedness of his Bayern Munich squad after they let a two-goal lead slip against Juventus on Tuesday.

The German giants were impressive for an hour in their Champions League last-16 first leg and went 2-0 up in Turin through Thomas Muller and Arjen Robeen, only for Paulo Dybala and Stefano Sturaro to net for the hosts.

The match finished 2-2, and although Bayern are still favourites to advance after the second leg at the Allianz Arena, Guardiola was clearly frustrated following the match, per the Daily Mail’s Matt Barlow:

I didn’t expect to come here and expect Juve not to shoot on target, or that we would play 90 fantastic minutes. They have players like (Mario) Mandzukic, (Paul) Pogba and (Leonardo) Bonucci, one of my all-time favourite players. And we showed character.

The Spaniard hailed Juve as a “great team” and said that, while it was a blow not to have hung on for the win, he was pleased with his team’s work.

Indeed, he even hailed it as one of his better nights in management and hinted that he could coach in Italy one day, per Barlow: “I am very happy with how I did. It is probably the evening that I am the most pleased as coach in my career. Maybe one day I will work in Italy. If they want me.”

On the contrary, Bleacher Report’s Sam Tighe was critical of Guardiola after the clash, suggesting that his change in formation allowed Juve the space they needed to get back in the game:

However, the Bundesliga giants have their two away goals and most certainly look the more likely to reach the last eight when the sides meet again for the second leg on March 16.

Guardiola already has three European Cup wins to his name—two as a manager, one as a player—all of them coming at Barcelona.

He departs Bayern to take over at Manchester City in the summer and will be desperate to win the Champions League this season in order to secure his legacy, which is not yet guaranteed, per MailOnline’s Kit Holden.

A 2-0 or 2-1 victory at the Juventus Stadium would have taken a huge amount of pressure off Bayern going into the second leg, but they have more than enough quality to complete the job either way.

Juve’s Paul Pogba said after the match that his side now know how to cause Bayern problems, per BT Sport Football.

And Bayern’s defence will have to be tight in the home leg to avoid a nervy occasion—scoring the first goal will be key for the hosts in the second leg.

While Tuesday’s result was clearly frustrating, Bayern are still in the driving seat to reach the quarter-finals.