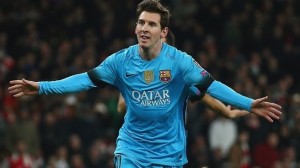 Lionel Messi ended the Gunners’ rearguard action with 19 minutes remaining before adding a spot kick to leave Barça firmly in the box seat.

Lionel Messi finally broke his Petr Čech hex as Arsenal’s impressive rearguard action ultimately came to naught against Barcelona in this round of 16 first leg.

Messi had not scored in six previous encounters with Čech but as the Gunners’ defensive steel began to creak he took his chance with 19 minutes left, completing a sweeping move. Another Messi goal from the penalty spot after he had been brought down leaves Arsenal staring at yet another UEFA Champions League exit in the last 16.

The first 45 minutes were a lesson in defensive discipline, with the compact hosts steadfastly refusing to be dragged out of shape by Barcelona’s fluid attacking. A rhythm soon established, with Messi, Andrés Iniesta and Ivan Rakitić patiently taking turns to test Arsenal’s resolve before the occasional burst of a home counter.

In fact, on the break, it was Arsène Wenger’s team who carried the greater threat. Had Mesut Özil’s cross been better, Aaron Ramsey could easily have made it 1-0. Then the unbalanced Alex Oxlade-Chamberlain squandered the best opportunity of all, scuffing tamely at Marc-André ter Stegen with the goal at his mercy. Regrets, they had a few.

Arsenal looked set to pay when they were run ragged either side of the interval, Luis Suárez twice going close and Čech denying Neymar. They regained their composure, but from then on the match was stretched, with space opening up at both ends. Messi capitalised, rounding off a move that had begun in his own area before driving in from the spot.

Key player: Lionel Messi (Barcelona)
Much has rightly been made of Barcelona’s gilt-edged front three, yet this was a triumph of the original among them. Arsenal must be sick of the sight of him. With the game opening up the Argentinian took it by the scruff of the neck, showing his trademark cool when it came to the crunch. Perhaps Messi’s greatest feat is that he always appears to have so much more time than mere mortals.

Arsenal fail to take their chance
If Luis Enrique was shouting ‘abracadabra’ to his magical front three in the first half, the noise of the crowd was drowning him out. They had plenty to shout about, too, with their players seemingly equal to the challenge of facing Messi, Suárez and Neymar. How different might things have been had Oxlade-Chamberlain taken that first-half chance?

Barcelona show no signs of slowing
Sections of the Spanish media have questioned Luis Enrique’s reluctance to rotate his squad in recent weeks, and some suspect the full-blooded pursuit of the ‘sextet’ (UEFA Champions League, Liga, Copa del Rey, Super Cup, Spanish Super Cup, FIFA Club World Cup) may yet take its toll. There is nothing like having 65% possession to help preserve energy levels, though, and Barcelona grew in strength towards the end.