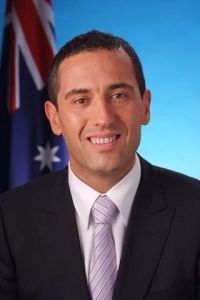 As he prepares to release the annual budget for South Australia, we sit down with the treasurer, the Hon. Tom Koutsantonis, to discuss matters which range widely, from his Greek heritage to his decision to get involved into politics, the Greek financial crisis and the current economic challenges facing South Australia.

The treasurer, the first Greek Australian to hold this political position in South Australia, reflects.

“I remember it was 1983. I was 12 years old and Bob Hawke had just been elected prime minister of Australia. The conversation around the family dinner table got me very excited. I followed politics from that time and before I knew it, I was volunteering at the office of Labor MP Jack Wright, deputy premier at the time, which was the turning point in my decision to make a serious commitment and get involved in politics.”

The proud son of two humble Greek migrants feels very honoured to be treasurer of South Australia today. “It’s a remarkable honour to be treasurer and it says a lot about this country and the migration story of Australia. A country where you can achieve anything.”

The treasurer has been active in supporting the Greek community, although he admits that keeping the Greek culture alive for the next generations is difficult.

“I am very worried about losing my cultural identity and heritage as a Hellene. I want my children to grow up learning to speak both languages and with the culture of our Orthodox faith. Our heritage and culture is very rich and very diverse but, if we don’t make the commitment, then our kids will grow up and Greece will be a distant memory.”

Mr Koutsantonis is also following the current economic situation in Europe and admits to being very worried about Greece.

“The country has been through so much, and Europe and the rest of the world don’t understand what has happened to Greece in the past, and the idea that somehow Greeks are lazy or that they don’t deserve to be in Europe completely misunderstands the history of Greece. The austerity measures in Greece imposed by the IMF and the European Union are unfair and don’t take into account the sacrifices Hellenes have made in the past.

“I can’t imagine Europe without Greece. Greece is the cradle of European civilisation and the idea that the rest of Europe will turn their backs on Greece, I find a little bit offensive. People are too quick to categorise Greeks as being tax avoiders, lazy or not hard working. That’s not true. Look at the entrepreneurs around the world who have Greek heritage and have built vast fortunes because they are smart and clever. People are too quick to push Greeks aside instead of standing next to them.”

According to Mr Koutsantonis, an economy is more than just money. It is about serving the public and the people.

“There are a lot of people working behind the scenes trying to make the Grexit happen, and while the EU will probably be able to survive without Greece, the financial crisis is a European problem; Greece is the heart of Europe and you can’t take the heart out of the body. Europe is on its knees, not just Greece. All of Europe. I am not sure why Spain and Italy get different treatment to Greece and I think that is right for the Greek government to be advocating very strongly for fair treatment.”

Moving our conversation onto his portfolio, we proceed to discuss the forthcoming state budget, which is due to be released shortly, and the current economic challenges, starting with two of the state’s major resources.

“We used to be the third largest producer of copper in the world at the turn of the 19th century. We are seeing the largest ever mass urbanisation in human history in India and China occurring right now. We have 80 per cent of Australia’s copper reserves, but our copper is deep and expensive to extract, but when you get there, the grade is very high. I think we are now at the right place in history to take advantage of this mass urbanisation and what we need to do is to really focus on how to extract that copper. So, if you are looking for a game-changer around the world, copper is a commodity that really is going to matter. As an example, iron ore at its very best is worth $124 a tonne. At its worst, copper is worth $6,000 a tonne. We have more copper than Western Australia has iron ore.”

Controversially, the treasurer is now also considering uranium mining, which wasn’t the case two years ago. “I have been a big supporter of uranium mining my whole life. For me, it’s a renewable form of energy that can reduce carbon emissions and provide developing countries with a cheap form of power that can help them drive their economies. As those economies grow, they need more power. I am talking about India, China and South East Asia. I don’t believe that they have the resources to properly dispose of their waste or manage their uranium, but they also can’t afford to build a coal generator because coal is expensive and a big pollutant. So, uranium is a clean way of providing them with that energy source, but it has very nasty by-products. We have very stable geology here and I think it is a matter of social and economic responsibility that if we sell them our uranium, we should look at whether we should take it back.

“We should also look at, through the Royal Commission, whether we should not just sell our uranium but enrich it here and add value for South Australians. When I made those remarks about not enriching uranium in Adelaide but supporting it, that was a different time and I didn’t think South Australians were ready. I think with what has happened to us now with the submarines, with the closure of Holden, South Australians are ready for a conversation about a big, broader uranium industry. That’s why the premier and I started this Royal Commission. We want a real investigation into whether we can do this safely, whether it is economically viable and if morally we should do it. My personal views are that the answer is yes to all three. I am not going to prejudge the outcome of the Royal Commission. Whatever they come up with, I think we need to do this in a systematic way because there are a lot of emotional responses to this from the public. The benefits will be beyond the life of the government. This is about establishing a new industry that we will not get the benefit of,” he concludes.

At the same time, Tom Koutsantonis is very concerned about the 13,000 jobs being lost due to the forthcoming closure of the Holden car manufacturing plant.

“There is not one measure that is going to fix this problem, it is going to be a whole series of measures in order to tackle it. There is going to be training, investment, tax, diversification and more trade, but there are going to be some people who aren’t going to find a job. We are already spending $60 million through the Automotive Transformation Program, but that’s just part of the picture. One of the biggest incentives we have at the moment is that the Australian dollar is dropping and interest rates are low, which could benefit with finding foreign direct investments.” Challenged on why they would invest in South Australia, Mr Koutsantonis believes that the state is a very safe place to invest, so the government needs to go out and encourage that investment.
On the topic of defence, the uncertainty of the submarine project due to Commonwealth government policy and the possibility of outsourcing troubles the treasurer.

“To put it in perspective, if the submarine contract goes to Japan, this country will be outsourcing the largest ever procurement that the Australian government has ever made since it began. It’s the largest contract ever signed as a country. To give that to a foreign country I think will be a tragedy due to the loss in taxes, jobs, expertise and manufacturing. Once it goes, it’s gone for good. We are the only people in the world to have a continent to ourselves. One sovereign government over one continent. It’s ours to defend. We can’t give that contract away to a foreign nation.”
Questioned over the highest-ever state debt, the treasurer is adamant that as a proportion of our gross state product, this is not South Australia’s highest debt.

“Our highest debt was around the State Bank time and our debts are very manageable currently, running at about 4 per cent of gross state product.”
However, he concedes that we need to get out of deficit. “We are putting every effort into creating a path of surplus identifying confidence and rewarding in the business sector as the main motivational tool which is to be achieved through tax reform. A tax system that incentivises hard work and doesn’t punish activity.”

On the reduction of concessions to pensioners, Mr Koutsantonis is categorical, whilst he suggests that party politics may be at play. “My campaign is working and people understand that the Commonwealth government had broken a promise not to cut pensions. I am not going to cut a cent to pensioners. They can’t mess with our pensioners, they built this country.”

Projecting five years forward, the treasurer identifies the five industries that could be a game changer for the economy: international education, tourism, food, mining and defence. However, he states that currently his biggest challenge is unemployment.

“I am very concerned about the unemployment rate. It’s too high. I can absolutely sort out the tax system to try to make sure we can give small businesses in this state every opportunity to hire people. We have to do more to restructure. I want to target more companies that do business in South Australia to move their headquarters here and bring diversity and opportunity. We have a tax system that doesn’t reward risk and a lot of businesses are making money but they are not expanding or hiring more people because they are worried about tomorrow.”

It’s certainly been a very informative and frank afternoon spent with the proud Hellene at the financial helm of the state. The challenges are real, the resources exist and the time is now for the treasurer to steer South Australia through these economic challenges by gaining the confidence and the will of the people he serves.