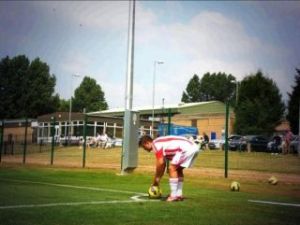 Young Aussie midfielder, Peter Makrillos is being trialed at AEK.

The 18-year-old is in Greece after a stint at English club Stoke and is hoping to impress the Athens team enough to get a lasting contract.

As a versatile player, Makrillos is being considered in an attacking or defensive role, and his caps with the Young Socceroos will be noted. The trial will last a week, where the young player will learn his fate with the club.

Family photo of EU Commissioners and members of the Greek government at the Zappeion Hall in Athens, at the launching of Greece’s six-month presidency of the EU. Photo: EPA/SIMELA PANTZARTZI

Prime Minister Antonis Samaras and European Commission (EC) President Jose Manuel Barroso on Wednesday both sought to strike an upbeat note at an official ceremony for Greece’s assumption of the European Union’s rotating six-month presidency, emphasizing the country’s progress in overhauling its problematic economy and playing down the fragility of Samaras’s government.

Addressing a joint press conference with Barroso, Samaras declared that “Greece, after great sacrifices, is leaving the crisis behind it.” Apart from economic recovery, he said Athens would focus during the presidency on battling unemployment and tackling security issues, including the problem of unchecked immigration.

Samaras referred to forthcoming European Parliament elections in May as an important landmark. “Voters will choose whether they want Europe or not,” Samaras said in response to questions about the stability of his government and the possibility of losses at the polls.

Barroso, for his part, acknowledged the risk of a rise in “extremism and populism” due to citizens protesting austerity but said, “I don’t expect these forces to win.”

The EC head urged the Greek government, and people, to stick to reforms that have been pledged in return for continued rescue funding from the country’s foreign creditors – the European Commission, European Central Bank and International Monetary Fund. “This is not the time to slow down the pace of reforms,” he said. “My point is very clear: Programs work, so we should not waste the efforts so far.”

He stressed that Greece was expected to emerge from its recession this year and noted that early talk of a “Grexit” had slowed recovery.

Barroso also lauded Greece’s role in its previous four EU presidencies, noting that it had played a pivotal role in pursuing EU enlargement and boosting institutions.

Opposition leader Alexis Tsipras boycotted the ceremony in protest at the government’s agenda for the presidency, which the leftists deem puts insufficient focus on boosting growth and curbing unemployment.

At the press conference, Samaras took the opportunity to denounce Tsipras and SYRIZA as “anti-European and anti-Western.”

In a related development this week, the head of the European Parliament’s Progressive Alliance of Socialists and Democrats, Austrian Hannes Swoboda, called for the “abolition” of Greece’s so-called troika of foreign lenders, whose envoys are due to return to Athens next week, accusing them of imposing “ruthless austerity” on Greeks.

Well-known architect Nonda Katsalidis and his group of supporting investors gave up their share in Australia 108 building, after a key miscalculation in planning was revealed.

The residential building had been designed by architecture firm Fender Katsalidis for Southbank and was expected to be the highest of its kind in the southern hemisphere, with 108 floors and reaching to 388 metres high.

The mega-tower was originally designed to follow the repetition of number ‘8’ according to feng shui principles to attract Asian buyers.

”The 388-metre height was not an accident. Good planning often coincides with feng shui and the number 8 is like a lucky rabbit’s foot,” Mr Katsilidis said after the project was announced.

In fact, some prospective buyers appear to have paid a $1000 registration fee to secure an apartment.

However, upon the design and approval of the building, architects Fender Katsalidis and Planning Minister Matthew Guy were not aware of the PANS-OPS flight path restrictions until Fairfax Media brought up the issue of violation of federal air safety regulations for Essendon airport.

Therefore, the height had to be reduced to just 132 metres, causing disorder to the original feng-shui vision elements incorporated in the structure.

Nondas Katsalidis, private investor Benni Aroni and Adrian Valmorbida of the Lavazza coffee fortune are among the people who financed the project, but according to Fairfax Media Australia 108 was put on sale after the failure of the original plan.

”As far as I’m concerned the project is going ahead and we’re still the architects,” Mr Katsalidis told Fairfax Media.

According to industry sources, Aspial Corporation is the Singaporean developer who purchased the project before Christmas with the sale price likely to be well within $30 million – The group’s plans for the project are expected to be released in early 2014. 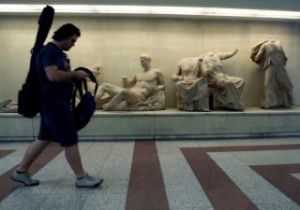 Shooting will start at the Acropolis in Athens on a film by two Greek American directors, John and Teodore Vourches, about the fight for the restitution of the Elgin Marbles to Greece.
The artefacts, which were removed and stolen sometime between 1802 and 1811 by Lord Thomas Bruce Elgin, British ambassador to the Ottoman Empire at the time, were sold to the British Museum in 1816 for £35,000, where they are still currently housed. Athens has been asking for restitution of the Marbles since 1981, when the cultural minister at the time was actress Melina Mercouri. The pieces in question include 15 metopes, 56 marble bas-reliefs and 12 statues (almost the entire west pediment of the temple), as well as one of the six caryatids of the Erechtheion. The Marbles decorated the temple of Athena Parthenos (Athena the Virgin), architectural jewel of the 5th century AD. Greek requests for restitution have fallen on deaf ears, as have international petitions and a request by the British Committee for Restitution of the Parthenon Marbles, which is supported by many British actors including Sean Connery, Judi Dench, Vanessa Redgrave and Sir Ian McKellen. British public opinion also favours the return of the friezes to Greece. The movie, called “Promachos”, is a Greek, French, and British co-production, and is named after the “Athena Promachos” (Athena who fights in the front line), a colossal bronze statue by Pheidias, that stood of the Acropolis between Propylaea and the Parthenon. It tells the story of a group of Greek lawyers who filed a lawsuit against Great Britain for the restitution of the Marbles. The legal team made the first step towards Great Britain when a court, after having heard arguments, declared that it was not competent to rule on events that happened in the 19th century. At that point the lawyers filed an appeal at the International Court of Justice in The Hague which settles disputes between United Nations member states who have accepted its jurisdiction.
According to the press in Athens, the Greek Central Archaeological Council has judged the film a good opportunity to change public opinion about the problem of international trafficking of ancient artefacts, and has given the two directors permission to film on the Acropolis.
Source: ANSAmed