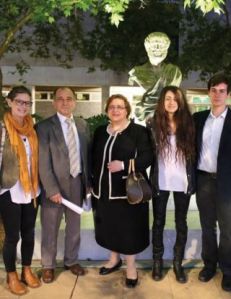 2013 has been the most successful year for the LOGOS Australian Centre for Hellenic Language and Culture at Flinders University in Adelaide. The development of online Modern Greek teaching programs for Australia-wide universities, the lobbying and campaigning to give the elderly in our community a voice and a face, and an increase in enrolments have all added to the tireless work of the centre, spearheaded by director Michael Tsianikas.
After 25 years as an educator at South Australia’s Flinders University, and 20 years heading the Modern Greek department at the university, Mr Tsianikas tells Neos Kosmos that “2013 was the best year” for Modern Greek studies.
“We noticed a 21 per cent increase in our enrolments and through the development the online teaching material we have more students engaged with us,” he says.
Last month, the LOGOS Centre – in conjunction with the Dimitria Greek Festival and the Pan Macedonian Association of SA – celebrated its inaugural Annual Aristotelian Celebration. The event marked a year since the unveiling of the Aristotle bust which was generously donated to the LOGOS Centre by the Halkidikeon Society of SA. The achievements of the LOGOS Centre were highlighted during the celebration, specifically the development of Modern Greek online programs, which Mr Tsianikas says will ensure the survival of the Greek language and culture at a tertiary level.
“When someone asks me ‘what is your goal? What do you want to do?’ I say to them I’m just working to help the one student who’s somewhere in Tasmania or Central Australia who wants to study Modern Greek. I want to be able to proudly tell them ‘yes’ when they ask me if they can study Modern Greek – that is my goal in life,” he says with conviction.
“I want to be able to say yes to every student who wants to study Modern Greek in any place in Australia in any university, I want to tell them that they can.”
As a whole, the LOGOS Centre has become a beacon for the Greek community of not just South Australia, but Australia wide, to campaign and lobby for the protection of Modern Greek at a tertiary level.
He uses the example of Queensland’s Greek community, who for more than 20 years were trying to establish a Greek program at a university. They were told repeatedly by all the universities they approached that they were not willing to establish a program because enrolments were not high. In 2012, Mr Tsianikas visited Queensland, had them establish a committee and together they lobbied the Griffith University and they agreed to start a Modern Greek program for language and culture – through the online teaching methods offered at Flinders University. At the same time they offered several scholarships of $3000 for any student wanting to study Modern Greek. Through this success he is hoping other cities will work together with the LOGOS Centre to establish Modern Greek programs through their universities.
“This is one lesson we can learn – working together we can be powerful and we can deliver solutions,” he says, “it’s not too late, there is still time to achieve things in this area of language and culture and to make sure that in 20 years time something will be around in this country.”
Mr Tsianikas says it’s the responsibility of all our community to insist on studying Modern Greek, and to make it part of our lives. He says studying Modern Greek is part of the students personality, their future, and ultimately, makes them happy; adding that this is the right of every student, not just one’s of Greek background.
“For 25 years I’ve been heavily involved in the community, but so far it’s been very difficult to explain, for people to understand how important the university program is,” he says.
“It’s the ownership of everybody for the representation and survival of our language and culture, and to develop the critical thinking of our students so it’s not just sirtaki and souvlaki.”
Greek communities and associations in Australia need to look at the bigger picture and not be solely consumed by their local events and activities. They need to understand the importance of the Greek language and culture as a whole and he feels that with the Aristotelian celebrations, they have created the foundations to see this happen.
“Through the foundations we’ve established in South Australia and the events we are organising, we are slowly getting there. People are becoming more enthusiastic and more supportive and developing trust,” he says.
Politicians and well-known Greek Australians are visiting the LOGOS Centre and becoming more supportive and interested in the programs and events they are developing. Through the LOGOS Centre, Mr Tsianikas says they are “creating a network” and “are developing lobbying possibilities”, at the same time aiming to complete the development of their online program over the next three years.
“The online teaching material we are developing for language and culture are becoming very popular and this is the best possible tool for us to expand nationally, and possibly internationally, and to give a solution for Modern Greek studies, in particular in Australia, because we’ve noticed over the last 15 years more than 10 university programs have disappeared and of the remaining 4-5 some of them are vulnerable with one staff member in some cases, so online for Modern Greek – and other similar community languages – is the solution,” he says matter-of-factly.
“We are trying to persuade the Greek community of not just Adelaide but the whole of Australia to embrace the idea the ownership of Modern Greek at university – and it’s not just about the lectures – it’s something that belongs to everybody as a whole.”
For more information on the LOGOS Centre visit flinders.edu.au/LOGOS