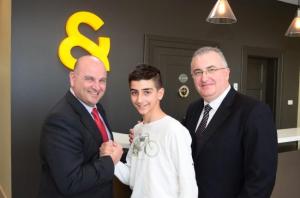 The much anticipated Dance Immersive, in its first collaboration with the highly acclaimed Hollywood Immersive, takes off this week in L.A.

Dancers from around Australia aged 12 to 18 years auditioned to attend the first Dance Immersive that kicks off from Saturday 25 June – a super intensive week for all the young dancers to present their own showcase to industry professionals. This is a once-in-a-lifetime opportunity that might see any of them secure a contract with a reputable U.S talent agency and take their career to the next level.

A private chef will stay with the young dancers in their Beverly Hills villa and they will be woken every morning by a personal trainer to go for a run through the L.A canyons before master classes with some of America’s most renowned choreographers including street dance legend Anthony Thomas, and Brian Nicholson who has choreographed performer Ariana Grande.

Director of Head Start Dance and Dance Immersive presenter, Bessie Kay, says only 15 young dancers from around Australia have been selected.
George Missailidis, 12, is one of the youngest Melbourne representatives chosen.

Proud parents Nick Missailidis and Maria Mastoropoulos say their son “was jumping for joy when he was told he was heading for Hollywood”.
Nicholas Psychogios and Trevor Buhagiar of Raine & Horne Hawthorn, who happen to have a fine appreciation of the performing arts, decided to offer George a generous sponsorship to attend the first Dance Immersive in Hollywood.

This is an amazing opportunity for young Greek Australian triple-threat, George who began acting, singing, and dancing at six years of age. He is currently in the Junior Elite Squad at Patrick Studios Australia training in Hip Hop, Tap, Jazz, Ballet, Musical Theatre, Acrobatics, Vocal, Contemporary and Lyrical. Proud of his Greek/Pontian heritage, George is also part of the Pontiaki Estia Junior Dance Group and has performed in various community events including Greek/Pontian annual dinner dances, local festivities, Fronditha Care and the Antipodes Festival.

“I hope to gain experience and exposure in the entertainment industry by working hard,” George, who has been training four times a week, tells Neos Kosmos.

“I want to accomplish the level of dedication required to be able to express myself comfortably. I take direction really well and love constructive criticism to enhance.”

His musical theatre debut was in Opera Australia’s ‘The King and I’ (2014) aged 10 years, in which he was the first Greek boy to be cast as principal royal child, ‘Prince Chululongkorn’, starring alongside Lisa McCune, Jason Scott Lee, and Lou Diamond Phillips.

He was also cast in the same role in Babirra Music Theatre’s ‘The King and I’ (2015), for which he received both Guild and Lyrebird Youth Award nominations. Other musical theatre credits include ‘High School Musical 2 Jr’, ‘The Little Mermaid Jr’ and ‘Hairspray Jr.’

A budding screen actor as well, George has featured in several short films.

‘Spill’, in which he plays the supporting role of Steven, recently screened at the St Kilda Film Festival and has been officially selected to screen at the Toronto International Film Festival later this year. This short is currently screening on all domestic Virgin flights Australia-wide.

As well as his passion for the performing arts and his commitment to his extra curriculum activities, George is also a very diligent student having received an academic scholarship to study at Patrick Studios Australia’s The Academy: High School of Performing Arts, whereby his passion for the creative arts and learning are combined.

“I have other aspirations as well besides dancing and acting,” George enthuses. “I enjoy many subjects at school such as English, literacy, mathematics, science inquiry, humanities, history, and writing.
“I haven’t decided yet but if I don’t pursue solely a career in singing or acting I would like to become a lawyer, a scientist, a mathematician or even an astronomer,” he muses.

He dreams of travelling the world and to one day be able to use his fame to inspire others and help those less fortunate in life realise their goals.

“In terms of musical theatre, I’d feel blessed if I could work with George Mc Cohan on Broadway. I still love school, though,” he says.

“I want to improve and show my talent but remain humble when victorious.”