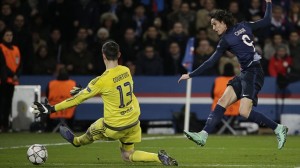 So it was hard to argue with Guus Hiddink’s take that his Chelsea team’s chances are “50-50”. Nevertheless, both those recent ties were settled on away goals and Jon Obi Mikel’s first-half leveller could yet prove crucial, particularly as the team that scored second progressed in 2014 and 2015.

Goalkeepers catch the eye
It has become a cliche in the French capital to say that Paris finished runners-up in Group A because of Kevin Trapp, the goalkeeper’s mistake at Real Madrid sealing a 1-0 loss. Given that it was the only goal he conceded during the entire group stage, that is a slightly harsh assessment, but the summer signing from Eintracht Frankfurt has also made a handful of errors on the domestic scene and remains something of an enigma.
Highlights: Paris 2-1 Chelsea

As an unknown quantity brought in to supplant the popular Salvatore Sirigu, the 25-year-old German was always going to have to work hard to win over supporters, but he turned in a faultless display and his instinctive save onto the crossbar from Diego Costa’s header will endure in the memory. “I’m convinced he’ll play a lot more games of this calibre,” commented Blanc. Trapp’s opposite number Thibaut Courtois was similarly impressive, meanwhile, keeping Chelsea in the tie with fine stops from the likes of Zlatan Ibrahimović and Ángel Di María.

Paris forwards prove points
Trapp was not the only player in the Paris ranks under the microscope. Ibrahimović went into this game saddled with a reputation for fading from view when the stakes are high, having managed just seven goals in 36 UEFA Champions League knockout games and three in 18 fixtures against English clubs at this level.

Here, though, he opened the scoring – albeit via a deflection – and played a part in Edinson Cavani’s winner, as the substitute showed what he too can do. Again left out of the starting lineup in favour of the lively Lucas, the Uruguay striker needed just four minutes to coolly slot in the winner after coming off the bench. “I hope this goal will give him confidence,” said Blanc.

Mikel: Chelsea still in it

Injury-hit Chelsea show grit
Chelsea supporters feared the worst when John Terry was ruled out of this match with a muscle injury shortly after fellow centre-back Kurt Zouma was sidelined for the season. They need not have fretted.

True, the visitors lost for the first time in the 13 matches since José Mourinho was dismissed, but Branislav Ivanović and Gary Cahill were formidable in the heart of defence – at one point throwing themselves in the way of a Blaise Matuidi shot – while young left-back Abdul Baba Rahman would have had an assist were it not for Trapp’s thrilling save from Costa. “We’re very disappointed to have lost the game,” said Mikel afterwards. “I think we deserved more.”

Hazard fluffs his lines
Long courted by Paris, Eden Hazard made waves before the game by suggesting it would be “hard to say no to PSG”. Here, then, was his chance to impress the hosts, who are still hunting a superstar solution on the left side of their attack.

Instead, while Willian and Pedro Rodríguez were the brightest sparks for Chelsea, the Belgian international had a low-key performance in keeping with his low-key season and he was promptly hauled off on 71 minutes. So majestic last term, Hazard has just one goal in all competitions in 2015/16 and will need to turn things around in the second leg – for Chelsea’s sake above all.