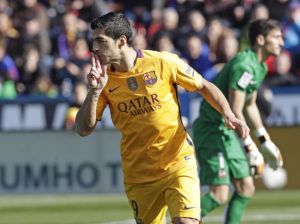 FC Barcelona lead La Liga with second-placed Atletico Madrid three points behind while Real Madrid are a further one point back. However, the Catalan club have a game in hand on both the Madrid teams.

Madrid: FC Barcelona equalled a club record of 28 games unbeaten to move three points clear at the top of La Liga with a hard-fought 2-0 win at Levante on Sunday while Real Madrid snatched a 2-1 win at Granada to stay in the title hunt.

Zinedine Zidane’s Real Madrid remain four points behind the leaders in third thanks to Luka Modric’s stunning strike five minutes from time to snatch a 2-1 win at Granada.

Meanwhile, the pressure continues to build on Valencia boss Gary Neville after his winless La Liga streak stretched to nine games with a 1-0 defeat at fellow strugglers Real Betis.

Barca were far from their best in coach Luis Enrique’s 100th game in charge, but David Navarro’s first-half own goal and Luis Suarez’s strike in stoppage time was enough to secure a 10th consecutive win in all competitions.

The European champions now lead Atletico Madrid by three points and have a game in hand on both Atletico and Real.

“More than statistics, I am interested in the collective objectives that we have and we can only reach them at the end of the season,” said Enrique.

“We are very well-positioned in all competitions, but there is a long way to go.”

Barca needed a slice of luck to open the scoring on 21 minutes as Jordi Alba burst down the left and his ball into the box was deflected into his own net by Navarro.

Levante remain rooted to the foot of the table, but deserved to be at least level at the break as they outplayed the Catalans in the latter stages of the first-half.

Jose Luis Morales came closest to equalising when his low effort came back off the post eight minutes before the break.

However, Barca took the sting out of the game in the second-half and sealed the points with the last move of the match as Lionel Messi picked out an unmarked Suarez to fire home his 36th goal of the season.

Real were also very fortunate to remain in the title hunt as they were dominated in large spells by Granada and were rescued by Modric’s fantastic late strike into the top corner from 20 yards.

“Modric scored a great goal that has given us life and, above all, three points,” said Zidane.

“You have to fight until the end and I’m happy that is what we did.”

Karim Benzema continued his fine form since French compatriot Zidane took charge last month as he converted Dani Carvajal’s cross for his seventh goal in five games after half an hour.

Granada’s fine build-up play lacked a cutting edge before half-time, but they got a break to level on the hour mark as Modric crashed into the referee, sparking a counter-attack which ended with Youssef El Arabi slotting home the equaliser.

Real looked jaded and off-form throughout, with Cristiano Ronaldo particularly anonymous, but their best player on the night, Modric, salvaged the three points when he fired home his first goal of the season five minutes from time.

At the other end of the table, Valencia remain just four points above the relegation zone as Neville failed to produce the reaction he hoped for following a 7-0 thrashing at the hands of Barcelona in the Copa del Rey in midweek.

“What matters are results. We knew this would be about one or two moments and they have not gone our way,” said Neville.

“It’s just not going for us at the moment. That was a pretty solid away performance. I continue to work, I continue to have belief and any conversations with the owners are between me and the owners.”

Betis hadn’t won for nine league games either, but eased their relegation worries as Ruben Castro took advantage of some statuesque Valencia defending to tap home his 10th goal of the season four minutes after half-time.

Alvaro Negredo had a great chance to equalise moments later, but Juan Manuel Vargas got back to clear his effort off the line before Valencia were reduced to 10 men late on as Jose Luis Gaya saw a second booking.