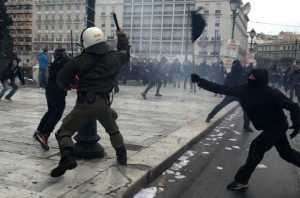 While Greek ministers were in talks with their lenders in a Syntagma hotel, 50,000 frustrated people started protesting against government pension reforms.

The crowd, carrying black balloons, marched on parliament, asking Alexis Tsipras to revoke the measures implemented to meet the IMF and EU’s demands.

Creditors also argue that Greeks will have to work up to the age of 67 to qualify for a pension – at the same time the jobless rate has climbed to a staggering 25 per cent among the nation’s young.

Meanwhile, an angry group of youths broke away from the body of the protest and begun to hurl stones and molotov cocktails at the police, who responded with several rounds of stun grenades and tear gas.

The 24-hour strike, which coincided with the official review of Greece’s performance on terms of its €86 billion bailout, is said to have worried the institutions.

The lenders still object to the 1.5 percentage point rise in social security contributions and are setting the minimum national pension at €384 per month, which is considered too high.

The Greek side insists that the quartet has not asked outright for a cut to existing pensions, which the government has set as a “red line” in the negotiations.

The troika will make its position known next week but will be watching closely for the Greek people’s reactions.

SYRIZA is also concerned that prolonged talks will cause more protests against the reforms put forward by the coalition, not to mention political turbulance.

The government wants to conclude the review swiftly to start talks on debt relief and convince Greeks that their sacrifices are paying off after six years of austerity and a deep recession that has brought the country to its current state of economic crisis.

“Greece’s economy will be the only one in the European Union to shrink this year,” the EU Commission said on Thursday, “but the fall is much smaller than previously estimated.”