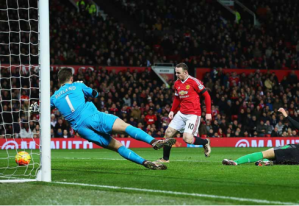 Red Devils within five points of Arsenal after 3-0 victory against Stoke City.

Manchester United ended their first-half scoring drought at Old Trafford as they found the net twice before the interval in a comfortable 3-0 victory over Stoke City.

Jesse Lingard scored their first goal at home before half-time since the end of September and Anthony Martial doubled the lead before Wayne Rooney got his 99th Barclays Premier League goal at Old Trafford early in the second half.

The victory took United to within five points of fourth-placed Arsenal, who lost further ground in the title race in a 0-0 draw with Southampton.

Visiting goalkeeper Fraser Forster was the Saints’ hero as he made a string of fine saves to ensure Arsene Wenger’s side failed to score at home in the league for the fourth time this season.

It also stretched the Gunners’ winless run in the BPL to four matches. Mesut Ozil had three clear chances to break the deadlock in the first half but was unable to find a way past the England international, who was on hand again after the break to deny Olivier Giroud and Alexis Sanchez.

Southampton could have inflicted even more misery on the Gunners had Sadio Mane and Dusan Tadic done better with chances of their own.

Michail Antonio got his third goal for the club shortly after half-time, as Villa were forced to play most of the match without Jordan Ayew, who was sent off for violent conduct inside 15 minutes.

Remi Garde’s team had one shot on target across the 90 minutes and could well have been on the wrong end of a heavier defeat but for a handful of saves from Mark Bunn.

West Ham had to make do with Cheikhou Kouyate’s 85th-minute effort at the end of a counter-attack to register a first victory in four matches in all competitions and maintain their push for European qualification.

Benik Afobe got his third goal in as many Barclays Premier League matches to earn AFC Bournemouth a 2-1 win over Crystal Palace at Selhurst Park.

AFC Bournemouth’s January signing from Wolverhampton Wanderers had a second-half header that aided his side’s fight against relegation and condemned Palace to a fifth straight Premier League defeat.

Palace had led in the first half when Scott Dann converted Wilfried Zaha’s cross but the Cherries equalised seven minutes later through Marc Pugh.

Emmanuel Adebayor’s hopes of a fourth debut goal in the BPL was not to be as he screwed a shot into the side-netting late on for Palace.

The defeat leaves Palace stuck on 31 points and in the middle of their worst run under Alan Pardew, while AFC Bournemouth’s hopes of staying in the division are being strengthened by their continued success away from home.

Salomon Rondon rescued a late point for West Bromwich Albion to earn a 1-1 draw with Swansea City at The Hawthorns.

The Venezuela forward scored his first Barclays Premier League goal since the end of October two minutes into stoppage-time after Swansea had cleared several efforts off the line during a frantic goalmouth scramble.

Rondon’s prodded goal cancelled out Gylfi Sigurdsson’s 64th-minute effort, leaving Swansea to rue what could have been as they chased a third win in a row and second since Francesco Guidolin took charge.