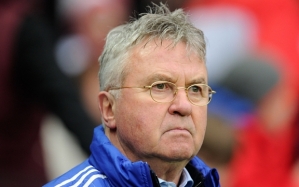 Arsenal will face Hull in the FA Cup fifth round, while Manchester United travel to Shrewsbury and Liverpool face Blackburn if they beat West Ham.

Guus Hiddink has described drawing Manchester City in the FA Cup fifth round as “a final” and warned that Chelsea have at last found their winning touch this season.

• Terry: This will be my final Chelsea season

The two clubs will now meet at Stamford Bridge on the weekend of Feb 19-22 in what is Manchester City’s third successive away draw against Premier League opposition in this season’s FA Cup.

It’s a final,” Hiddink said. “Already a final now. A huge game, so start the final next round.”

There are two other all Premier League ties, with Bournemouth hosting Everton and Tottenham Hotspur having been drawn at home against Crystal Palace.

The defending champions Arsenal have received another favourable draw after their weekend win against Burnley and will play Hull City at the Emirates Stadium in what is a repeat of the 2014 final.

In the other matches, Manchester United face a trip to League One Shrewsbury Town, Reading play West Bromwich Albion or Peterborough, and Blackburn Rovers have been drawn at home against Liverpool or West Ham United.

Chelsea remain unbeaten under Hiddink, winning four and drawing four, culminating in their emphatic 5-1 win against MK Dons on Sunday to progress into the last 16 of the FA Cup. Oscar scored his first Chelsea hat-trick in the match while Eden Hazard also scored his first club goal of the season.

Chelsea were beaten 3-0 by Manchester City at the start of the season but Hiddink, who won the FA Cup in 2009 and still has a perfect record in the competition, believes that they have now turned a corner. “The players have responded very well to the way we are working,” he said.

“It was important to get some results. There were draws in the beginning, and the standard of this club means we need more than draws, but we have to find some ­security at first. Now we are moving into the area of victories. The players responded.

“There is quality in the team, but also the will to do, also, a very disciplined tactical work as we demand. That’s more in the direction of the defensive, well-organised work they do. Not just the defenders, but also the creative players working hard. That’s benefiting the team.”