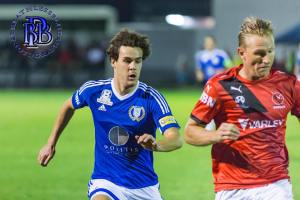 EDGEWORTH became the first Northern NSW club to make the last 16 of an FFA Cup after a 3-0 win over Far North Queensland Heat on Wednesday night at Barlow Park in Cairns.

Aaron McLoughlin was on the spot to score off a rebound in the 31st minute when Dylan Holz hit the post with a sweet strike.

Daniel McBreen got a near-post touch to a Bren Hammel cross in the 65th for 2-0 and Brody Taylor beat two defenders to convert a breakaway chance in the 86th to seal the win. All three NNSW qualifiers, including the Jets, had exited in the round of 32 over the first two years of the nationwide knockout and the Eagles were determined to make history.

The Newcastle Jets take on Melbourne Victory at Magic Park next Wednesday night and Lambton Jaffas are away to Devonport on August 10.

Also Wednesday night, Andrew Pawiak scored a late penalty to give the Jets Youth a 1-1 NPL draw with Maitland, who went ahead early via a Ben Martin goal.

In Cairns, Edgeworth had the better of the opening exchanges against a Heat side who were content to sit deep and attack with long balls.

McBreen was wide with a reflex strike when the ball rebounded off an out-of-position keeper in the 21st minute.

Keanu Moore was then unlucky not to earn a penalty when away on goal and taken down in the 29th minute.

The Heat matched the Eagles early in the second half but the visitors lifted again, despite some players struggling with cramp, to take control.

Moore was a standout for the Eagles up front, while the likes of Lachlan Pasquale and Josh Evans helped limit the Heat to only a handful of chances. McLoughlin and Hammel were also regular threats down either flank.

Edgeworth coach Damian Zane was thrilled with the performance.

“Our boys are quality boys and I just think we’ve got a problem in our town that we are quick to bag the players we have.

“But I think tonight we showed our players can play and can produce in big games.”