The successful Greek Australians of Queensland 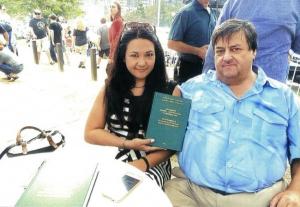 It’s no secret that Australia is home to a number of successful Greek Australians, and journalist Nick Papadakis has made it his mission over the last three decades to ensure that they are honoured and remembered.

In 1987 he released a book on the Successful Greek Australians of Victoria, followed by an equivalent for those in NSW in 1992, and this time around it’s Queensland’s turn.

“Through this project, the aim is for the next generations to be able to see what the first comers from Greece in Australia have done, and to know how they educated their kids, acquired property, and everything else the Greeks have done in Australia,” Mr Papadakis told Neos Kosmos.

“When I had three matches or more, I would contact them. So the people in the book chose the rest of the people,” he explains.

The book, which features 148 Greek Australians across the sunny state, is predominantly made up of first and second generation migrants, with their stories delving into how they ended up living Down Under, their back stories revealing the intimacy of their lives.

“We also found a few third and fourth generation, and the first comers were in the 1900s. So they told us as much as they could about their great-grandparents, which was probably the most interesting part; learning about who the first ones were,” tells Mr Papadakis.

Officially launched last month at Brisbane’s Greek Club, the event was opened by Honorary Secretary of the Greek Consulate in Brisbane, Tsambico Athanasas.

A four-minute video was projected, showing the Patris on one of its many trips of the 1960s from Piraeus Port to Australia, before Professor of Ancient Greek Bob Milns took to the floor to speak about the impressive contribution Greeks have made in Australia.

Vasiliki Papadakis also addressed those gathered, having worked alongside Mr Papadakis on the project as a co-author.

She praised the book as ‘a university of life’, having had the chance to meet a number of highly-qualified people through the experience, who despite adverse circumstances managed to thrive and excel.

“Through your true stories, I felt the emotion – sadness, happiness, affection, love and respect. For all these feelings, I want to tell you that it was an honour to get to know you and to understand the true meaning of Australia’s Hellenism,” she said.