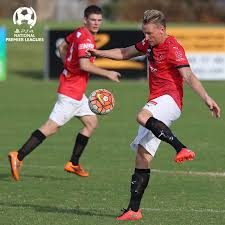 Edgeworth will play Sydney United 58 or Brisbane Strikers in the final of the National Premier Leagues Finals Series after beating Perth SC 1-0 in Western Australia on Saturday night.

A goal in the 51st minute from veteran striker Daniel McBreen settled the contest at Dorrien Gardens as captain and man of the match Josh Evans led another strong defensive effort from the visitors.

The Eagles, who also beat 2015 Queensland premiers Northern Fury 3-0 in the FFA Cup, have now beaten three state champions on the road this season, scoring seven goals to one in the process.

Sydney United host the Strikers at Edensor Park on Sunday to see who will meet Edgeworth in the final.

The date and venue for the decider will depend on who wins on Sunday in Sydney. If Edgeworth host the final, it will most likely be next Saturday.

The Eagles are the first Northern NSW team to qualify for the national NPL final.