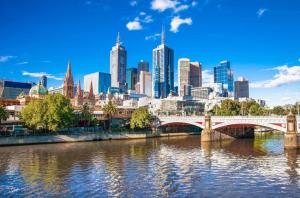 For the sixth year running, Melbourne has secured perfect ratings for healthcare, education and infrastructure

Melburnians are sure to be feeling a little pleased with themselves today after the city topped the Economist Intelligence Unit’s (EIU) Liveability Index for the sixth year in a row.

The prestigious EIU index is a survey of 140 of the world’s best cities, with Melbourne emerging with perfect ratings for healthcare, education and infrastructure and a score of 97.5 out of 100.

One point below Melbourne in second place was Austria’s Vienna, followed by Canada’s Vancouver and Toronto.

Adelaide tied with Calgary, Canada in fifth place, while Perth ranked seventh, and Sydney ranked seventh last year, dropped out of the top 10.

So how has Melbourne managed to maintain its title at the top?

Known for its multiculturalism, the city also ranked highly with regards to culture and the arts, and maintains its national title as the sporting and events capital with the Australian Open, the Formula 1 Australian Grand Prix and the Spring Racing Carnival amongst others.

It’s easy to see why international visitation has grown by 9.2 per cent annually.

Meanwhile more than 175,000 international students are currently studying across Victoria, which boasts one of the fastest growing economies in the nation, leading the way in full-time jobs growth.

“This is a result all Victorians can be so proud of,” said Victorian Premier Daniel Andrews.

“We’ve once again outperformed some of the world’s best cities when it comes to healthcare, education, infrastructure, culture and environment, and sport,” he said, adding that “it’s just more proof there’s no city on earth quite like Melbourne.”

In a bid to avoid getting complacent and to maintain the city’s ranking, the Andrews Labor Government is about to embark on various major infrastructure projects including the Metro Tunnel, the Level Crossing Removal Project and the Melbourne Park upgrade.